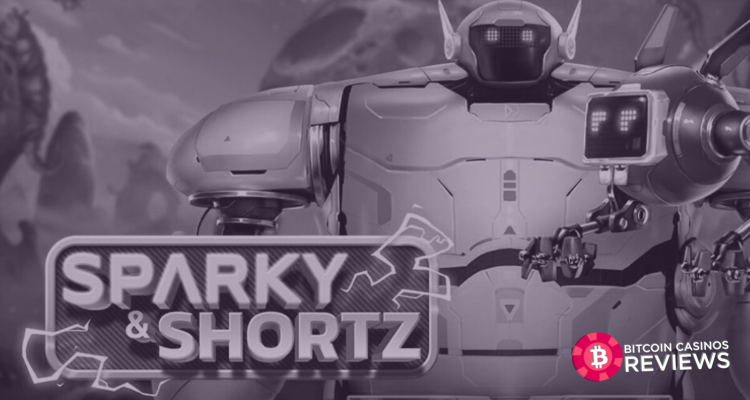 Sparky & Shortz is a sci-fi-themed crypto casino slot provided by Play’n Go. The story is about two robot aliens: Sparky – a maintenance droid and Shortz, his companion and a life-saving robot. They live on the planet Alpha Labori and the planet’s future survival depends on the two friends. Sparky activates the Boost Meter which increases the Multiplier number. The game is very colorful and will satisfy those who like a challenge. The adventure starts in the basement and as you continue to play you move Sparky and Shortz up to the surface where they can join the alien world and complete their mission. The game features high-quality graphics and bright colors and special features like additional Sparky & Shortz free spins and bonus rounds. 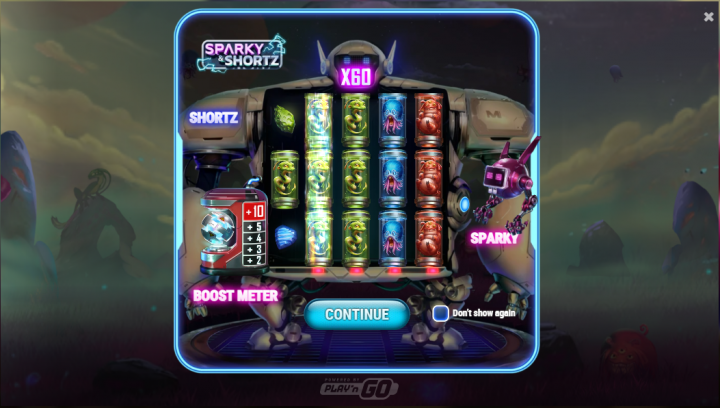 Sparky & Shortz is a high volatility slot with 5 reels and 10 paylines. Sparky & Shortz has 10 different symbols that include aliens and colorful space rocks. When triggering the Sparky & Shortz Free Spins feature you can play up to 100 free spins. The RTP of Sparky & Shortz is 96.28%. The RTP number is the percentage Return To Player, this means that when playing Sparky & Shortz, people have the opportunity to win 96.28% of their total bet at some point. You can win the maximum of 10 000x your base bet.

It is incredibly important to feel like you are a part of the world while playing the game. The visuals and the audio are what give you the sense of involvement and what attracts the players, especially the players interested in the robot aliens-themed games.
It is clear that the team of Play’n Go put in a lot of thought while creating the game. Sparky & Shortz is designed to take you to the cosmic world of robots and aliens. The bright neon colors bring you to a galaxy far away, they give you a visual of how you imagine futuristic technology would look. Neon red, blue, purple, and green reminds us of our favorite sci-fi movies like Star Wars and the Guardians of the Galaxy. The movements and transitions through colors are very smooth. These colors get you involved and they capture your attention, which is what makes getting Sparky & Shortz bonuses and free spins far more exciting. 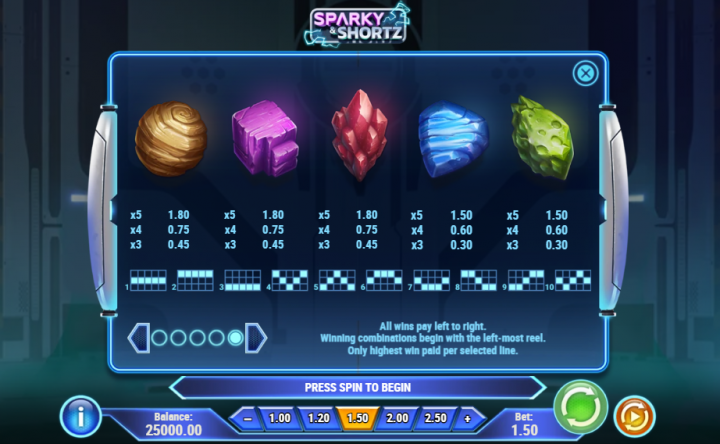 As mentioned above the game starts in the basement and you get to go to new places as you level up and bring your characters to the surface. It is notable that every new location has its own design and feel. The symbols that appear on Sparky and Shortz are always visible and they play around the screen.
On the playing board, you can see different colored space rocks and aliens. The symbols include green, purple, red, gold, and blue colored space rocks as well as green, blue, and red aliens. In addition, there is a Swirling Vortex Wild symbol that substitutes for the other symbols and pays up to 20x stake. There’s also a Power Cell symbol that activates the bonus round.

Sparky & Shortz Rules – How Do You Play It?

Slot games have pretty simple rules and Sparky & Shortz is not an exception. However, if you are not familiar with how slots work in general, you can use this review as your Sparky & Shortz guide. There are eight regular pay symbols, as mentioned above the colors and the shapes of the symbols are different. There are colorful space rocks, aliens, and additional two symbols. If matching symbols land 3 rows high on a reel, they become a stack and the win multiplier gets an additional +1. The displayed value multiplies the wins. You can keep track of the multiplier on Shortz’s body. After each paid spin the win multiplier resets back to x1. 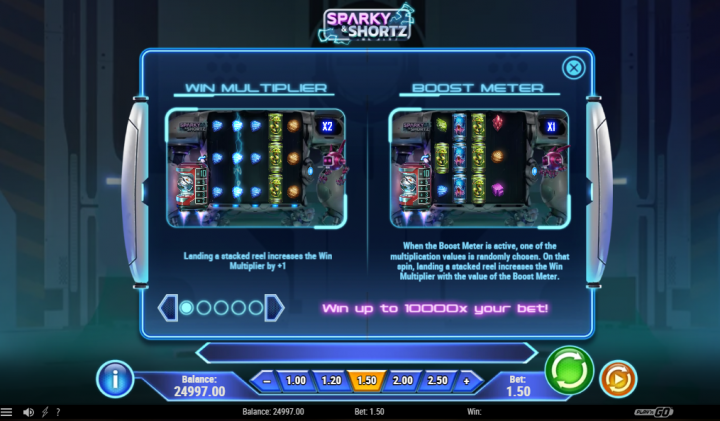 Sparky gives you a hand by attempting to activate the Boost Meter. If his attempt is successful, stacked reels increase the win multiplier by the value shown on the Boost Meter. The Power Cell scatter symbol lands on reels one, three, and five. If all three land at the same time, players are given 10 free spins that increase the chances of winning more. During the bonus round the Boost Meter symbol is constantly active and it doesn’t reset between spins.  You will be awarded +5 additional free spins, up to a maximum of 100 when 3 Power Cell scatters land in the feature.

Sparky & Shortz Paytable – How Much Can You Win?

As mentioned above, the game has an RTP of 96.28%, which means you will be able to win 96.28% of your bet at some point. You can win the game by luck because it has random outcomes. You can bet several currencies on the game, including the digital currency, for instance, Ethereum,  Bitcoin, or Litecoin, and you also get what you win in the form of the currency you bet in the first place. The maximum payout of the slot is 10 000x the base.

In this part of the Sparky & Shortz review, we will elaborate on the special symbols. The Power Cell scatter symbol awards you with 10 free spins bonus round if you get the symbol in all three reels where it can land: reels one, three, and five. The main part of the slot is the Boost Meter and Win Multipliers feature. Each time a full stack is landed, the win multiplier gets an additional 1x. You can see the Boost Meter on the left side of Shortz. Sparky attempts to activate it after each spin. The value on the Meter is random and it can be any number. During the special bonus round of 10 free spins, the Boost Meter stays active and the win multipliers do not reset after each spin.

What is the RTP of Sparky & Shortz?

The average RTP of slots is 96%. The RTP of Sparky & Shortz is above average with the opportunity for players to win 96.28% of their total bet.

Does Sparky & Shortz have a bonus round?

Sparky & Shortz has a special bonus round, which is activated by the landing of the Power Cell scatter symbol in three or more reels.

Can I play Sparky & Shortz for crypto?