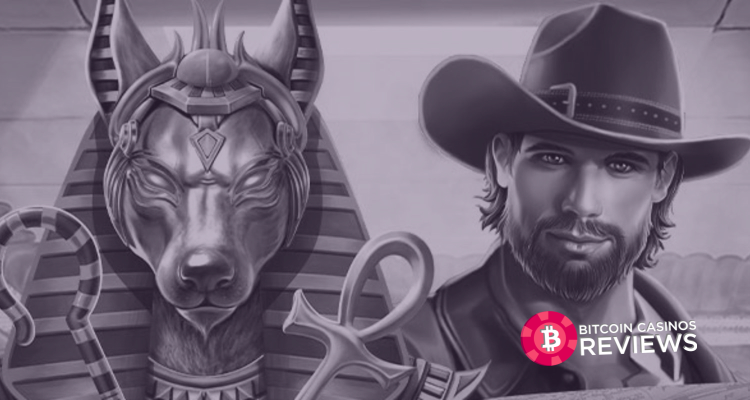 Pragmatic Play is known for creating slots that are connected to each other. One of its main characters includes an explorer John Hunter who has not finished his adventures as he continues his expedition in the Book of the Fallen online video slot. The players can join this Indiana Jones-inspired hero in uncovering the treasure hidden in the Egyptian pyramids. Gamblers all over the world have the opportunity to enjoy this game in their native language as the slot is presented in over 30 languages.

This game is of high volatility and gives you a chance to win up to 5 000x the original stake. With 10 pay lines and several special features of the slot, you are offered high-quality gameplay. You can enjoy Book of the Fallen at many online crypto casinos for Bitcoin, Ethereum, Litecoin, and other digital coins of your preference. The RTP of Book of the Fallen is 96.50%, which is a very satisfactory amount if we remember the fact that the usual casino games’ RTP is 96%. RTP is the return to player percentage, so this is the amount of what returns to the player out of their bet in the duration of the game. The game comes with a special element of Super Spin Ante bet – when this feature is activated, the theoretical RTP switches to 96.49%. The players also have the opportunity of buying the free spins feature to enjoy the expanding symbols element without having to wait for Scatters to land to activate the Book of the Fallen bonus game. 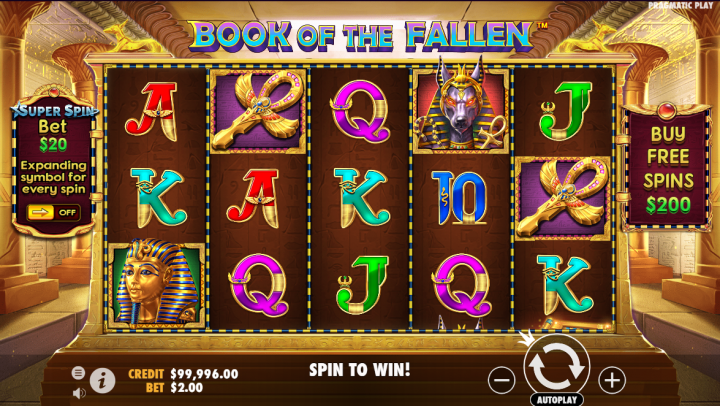 Fans of Pragmatic Play are used to detailed graphics and visuals, as well as the games with big prizes, interesting plots, and an overall amazing gambling experience. Book of the Fallen doesn’t betray its premise, as it follows the gaming company’s standards perfectly. We have seen John Hunter before in John Hunter and the Aztec Treasure, John Hunter and the Quest for Bermuda Riches, and John Hunter and the Tomb of the Scarab Queen. Therefore, you can expect another successful journey through the ruins of the ancient Egyptian empire where you can collect gold and riches with the help of our experienced adventurer.

Book of the Fallen Visuals and Audio

Book of the Fallen has similar visuals to the other John Hunter adventure series, however, the setting and the details of the symbols are different. We see our hero with Blue eyes, a beard, a hat, and the usual explorer outfit from the 80s. The reels are set in the middle of an ancient palace with golden poles and light-colored bricks. This slot reminds us of old action movies like The Mummy with its visuals. We take a trip to Egyptian landmarks where the divine sunlight shines on the heated sand and ruins. The winning lines that you land on the reels are presented with colorful lines tracing the symbols, with a golden glow around the winning reels.

The Book of the Fallen free spins round is a bit different with the background colors. The setting changes to a dark room light with fire and purple shining walls with hieroglyphs on them, the hieroglyphs glow with a golden shine every now and then. When you land a big win the game celebrates with rattling coins being thrown at the screen. The players can see the ancient Egyptian theme is followed through with the symbols that contain an illustration of the Egyptian god of death – the human with the head of a dog – Anubis, a golden key with wings, a statue of a pharaoh painted gold with its blue and cold striped crown and beautifully painted eyes, and of course, the book of the fallen, which is a red book with golden details and an Egyptian-style illustration of a blue and gold eye. The reels have two golden statues on placed top edges, a nice little detail is a small animal running behind the reels every now and then. 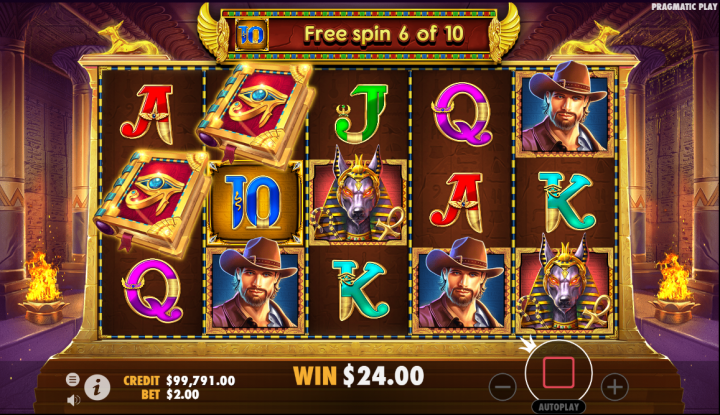 The audio of the game is what you would imagine hearing in a film about exploring a lost mythical city in the middle of Egypt. The background music is a terrific melodic instrumental that takes the players to the ancient, divine land of the 9 gods of the mythical African civilization, with a few magical sound effects added that sound like what it looks like to see gold shinning. When the free spins bonus game is active you can clearly hear the drums getting faster and louder along with the other instruments. This makes the gaming experience far more thrilling. When you win a big prize the loud music of a game show is heard with the coin-rattling sound added to give you a feeling of victory.

Book of the Fallen Rules – How Do You Play It?

Video slots are relatively easy to play, it doesn’t take much to spin the reels, you only have to hit the spin button. However, the newer players of casino games may have some questions considering the bonus features that slots usually come with. Book of the Fallen is no usual slot, it comes with multiple bonus elements that will excite you.

We already covered that in the main game round you only need to hit the spin button to activate the reels. You can make a bet of a minimum of 0.10 USD, or of 1000 USD, the winnings will be multiplied according to the paytable and the pay lines. There are 10 pay lines and regular and special symbols on 3×5 reels that give different prizes – they all pay left to right on adjacent reels. The John Hunter illustration is the highest-paying symbol giving out 500x the total bet, as for the special symbol – it is the Book of the Fallen bonus Scatter symbol that can also substitute for the other symbols, therefore taking the functions of the Wild symbol. The specialty of the Scatter is activating the free spins feature by landing on at least 3 reels at once. 5 of the Scatters landing together will pay 200x the bet. 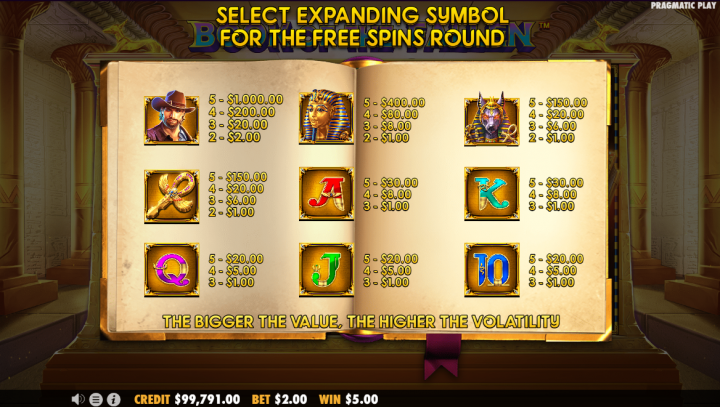 You may also notice a Super Spin option on the left side of the reels. This feature is called the Super Spin Ante Bet and it can add an expanding symbol on the reels. You can pay 10x the current bet for a single spin and then you will be given an option of symbols – you choose one of them and it takes the special feature of expansion – these symbols all have different paying values. While the Super Spin is active, the symbol will expand at the landing – this feature is similar to the Free Spins Bonus round, but we will explain more details about that later in this Book of the Fallen guide.

Book of the Fallen Paytable – How Much Can You Win?

We wouldn’t be surprised if the readers’ primary question is regarding the payouts of the game. Book of the Fallen is a highly volatile game, meaning that winning lines don’t land on the reels as often as you’d hope, but the payouts, whenever they may occur, are terrific.

The John Hunter symbol alone pays 500x the bet if you land 5 of them on the pay lines. Free Spins feature comes with its own perks, as it offers a bonus expanding symbol that has the power to take over the reels entirely and pay big sums of money by doing so.

Book of the Fallen Bonus

Book of the Fallen bonus free spins round can be won by the player if they land 3 Scatter symbols anywhere on the reels at a time. This way, the books will combine and open up and the player will be given an option between all of the symbols that the game has to offer. The selected free spin takes the power of expansion and the round starts with 10 free spins. 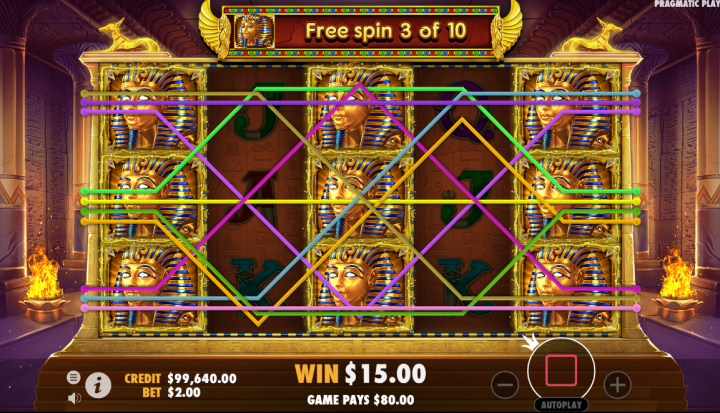 The reels spin automatically during the Book of the Fallen bonus game, if the player hits enough regular symbols to create the winning combination, expanding symbols anywhere on the reels will expand to cover all 3 positions vertically on the reels. You can win 10 more free spins since the Scatter symbols are active during the special feature as well. The free spins game will stop automatically if you land a win of 5000x the bet.

What Is The RTP of Book of the Fallen?

Theoretically, the players could get 96.50% of the initial stake in return. The average RTP of casino games is 96%, therefore, you could say that the Book of the Fallen RTP is generous.

Does Book of the Fallen Have a Bonus Round?

Yes. The players have the opportunity to win a Book of the Fallen bonus free spins round by landing three Scatter symbols on the reels or purchase the special round with 100x the bet. The bonus round is combined with 10 free spins in total, but the player could increase the number.

Can I Play Book of the Dead for Crypto?

Yes. Book of the Dead is a crypto-friendly slot that is available for Bitcoin, LTC, ETH, and even other digital coins at online crypto casinos.