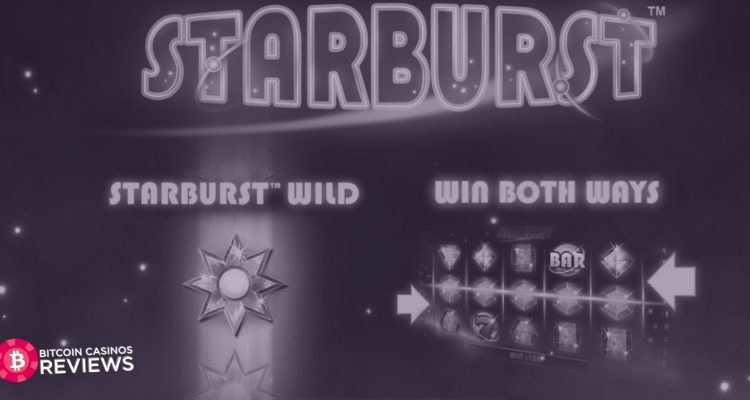 Starburst is a slot game developed by NetEnt in 2012 and still is one of the most popular ones there. The game is a favorite for many people because of its easy playing rules, dazzling visual and audio, generous paytable, and unique feature. In this Starburst review, we are going to talk about every single aspect of the game.

The RTP of the game is 96.07%, which is average and is not very generous, but the volatility of Starburst is low, which means that you can get a constant stream of wins and it will not take long to win again after the last success. Starburst is classical 5 reels and 3 rows slot game with 10 different pay lines which is a pretty high number for the low volatility slot game. The maximum bet of the game is £100, while the minimum is £0.10, which makes the slot available for the players of any category. 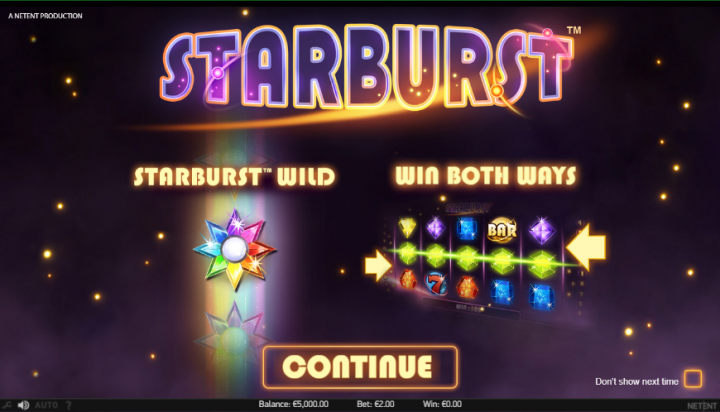 The Visual and audio of Starburst is one of the components which make the game special and enjoyable to play. According to the name of the game, it is easy to guess that the theme of Starburst is stars. Once you start playing you will see that the reels are spinning in the background of a galaxy with the purple planet and shining stars. The symbols of the slot are sparkling crystals which are not really connected with the theme of the game but they are very beautiful and cache our eyes with their lovely visuals. The symbols are very colorful and perfectly match the galaxy background. The audio of the game is very satisfying and makes the playing process much more entertaining. Once you start playing the music, which will remind you of aliens and a bit of the movie “Cosmic Odyssey” starts and makes our “journey” delightful. The sound effects are also really cool and make the result of the music even stronger. Given the circumstances, it will be completely fair to say that if you are searching for a slot game with the cool music accompaniment Starburst definitely is the right choice for you. 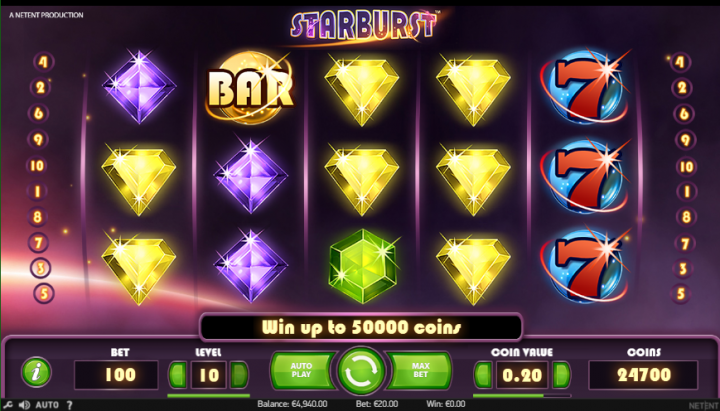 Starburst Rules – How Do You Play It?

Like most of the slot games, Starburst is very easy to play, but if you are a complete beginner, you can use this review as the Starburst guide. As I already said, Starburst has 3 rows and 5 reels, which is typical for classical slot games. You simply need to spin the reels with the spinning button which is below the reels to play. If you are too busy or just lazy to do that, you can use the autoplay button which is on the left side of the spinning button. With the autoplay button, you can choose the number of the spin from 10 to 1000 and it is noteworthy, that Starburst has one of the highest auto-play ranges. To win money, you have to get the winning combination and you will get the prize according to the symbols which are in your winning line.

Bet line pays out when it is in succession from both, leftmost to right and rightmost to left and it only pays the highest win per active bet line from both ways. Besides regular symbols, there is a wild card in the game which is a colorful star. This star can replace any other symbol in a winning combination, but it only appears in second, third, or fourth reels. If one or more Starburst Wild symbols appear anywhere, it activates the wild feature which, in fact, is a Starburst bonus. 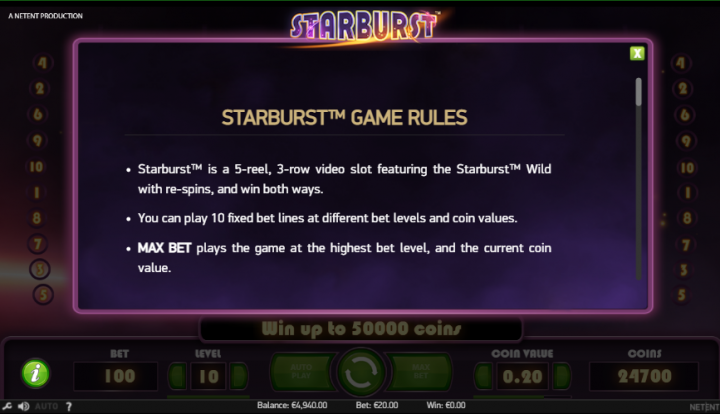 Starburst Paytable – How Much Can You Win?

As we already mentioned, Starburst has 10 different pay lines, which come in the shapes of straight lines, triangles, zigzags, etc. Once you get the winning combination with one of the seven symbols, you will win the prize which depends on the symbol that gave you the winning line. Crystals – the sparkling rocks, are the lower symbols and come in five colors: purple, blue, red, green, and yellow. The purple and the blue crystal will give you 5 coins if you get the same 3 of those symbols in the right combination, 10 coins if you get 4, and 25 coins if you get 5 of them.

Finally, we have a Bar symbol, which offers 50 coins if you get 3 of them in the right combination, 200 coins if you get 4, and 250 coins if you are lucky enough to get 5 of these symbols in a winning line. We have to say that, for the low volatility slot, the paytable is pretty generous. 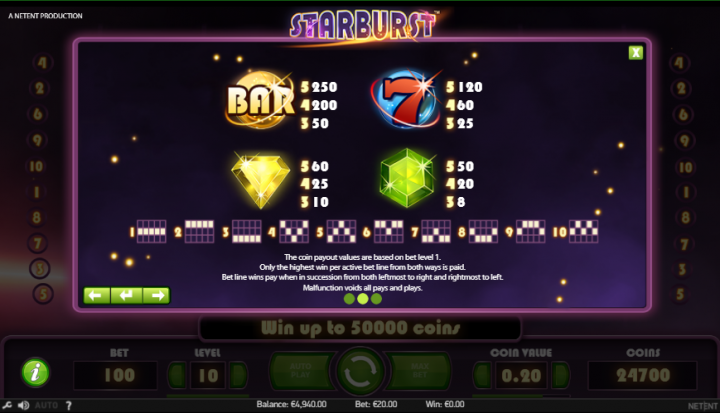 As I said earlier, Starburst is a classical slot game and does not have many unique features to offer, but it still is one of the favorite slot games for many people. The only special feature of the game is the wild card, which as I already said can substitute any other symbols, and also, it can win you a Starburst free spin, which can help you win more money. During this free respin, the wild symbol expands to cover an entire reel, and other reels spin and it can bring you a win as big as 50 thousand coins. We can say that this is the bonus round of the game. 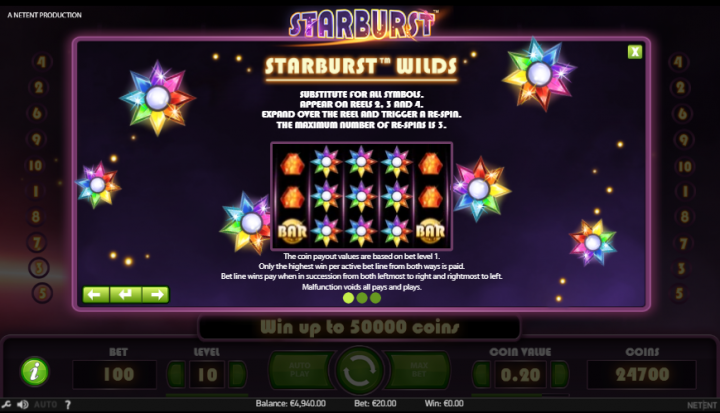 Can I play Starburst free?

Yes, you can, but the Game History is not available when you are playing for fun.

Does Starburst have a bonus round?

Yes, it does have a bonus round which is a respin, that gives you a chance to win a big amount of money.

Can I play Starburst using cryptocurrency?

It is possible if you use a website that offers their clients crypto services, for instance, BitStarz, 7Bit Casino, or BAO Casino.