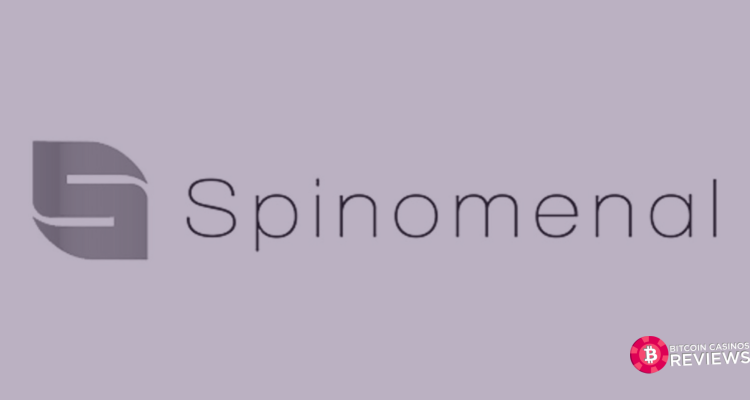 Spinomenal is a software development company that was founded in 2014. The company has created more than 100 games and most of them are video slots with high-quality graphics and interesting themes. Spinomenal has quickly gained popularity and the trust of the players as it has certifications from countries like Sweden, South Africa, Lithuania, Spain, Belarus, Portugal, Croatia, Serbia, Colombia, Estonia, and Georgia. The developer spends much time thinking about the content of the games and you will feel their hard work from the second you start playing their slots. It is also noteworthy that playing their games is possible using almost any currency, including crypto. In this review, we are going to talk about the top Spinomenal slot games which are Nights of Fortune, Gangsters Gold, Age of Pirates, Story of Hercules, and Story of Medusa.

Spinomenal has developed more than 100 video slots and each of them is unique because of its interesting themes and high-quality graphics. You will travel through the dozens of different magical worlds and meet various characters while playing the slots developed by Spinomenal. The content is well thought and matching to the players’ wishes and it is what makes them so popular.

Nights of Fortune is one of the first Spinomenal crypto slots and it has quickly gained popularity with players because of its impressive visuals and interesting theme. RTP of the game is 92.17% which means that you have an opportunity to win 92.17% of the total bet at some point. Nights of Fortune has the aesthetics of the western Asian culture. Once you start playing, you will see the classical playing board with five reels and three rows with the background of the traditional Arabian room. The symbols are connected to the theme too as you can see native and fictional animals of western Asia with traditionally dressed men and women. The game comes with 50 different pay lines and a generous paytable which is another reason to immediately start playing Nights of Fortune. Except for the paying symbols, you will meet some unique cards in the game.

The wild card of the game is a dancer symbol and it can substitute any paying symbols in the winning combinations. If you get the symbol in the second or in the fourth reel it will expand and fill the entire reel and it will lead you towards the big win. There also is a free spin symbol, which is a traveler and will award you seven free spins and a 3x multiplier in the free spins round if you get three of them anywhere on the reels, twelve free spins, and a 5x multiplier during the free spins round if you get four, and fifteen free spins and 7x multiplier in the free spins bonus if you are lucky enough to get five of these symbols on the reels. Also, there is a bonus symbol, which is a magic lamp, just like the one in Aladdin, and triggers the bonus round.

Gangsters Gold is the latest Spinomenal Bitcoin slot game which was released in April of 2021. RTP of the game is 96.31% which means that you have an opportunity to win 96.31% of the total bet at some point. The game has quickly gained popularity because of its interesting theme and impressive visuals. Once you start playing you will see a classical playing board with five reels and three rows and with the background of a rainy night in Chicago. The symbols are also connected with the aesthetics as you will see the classical attributes of the gangsters among them. 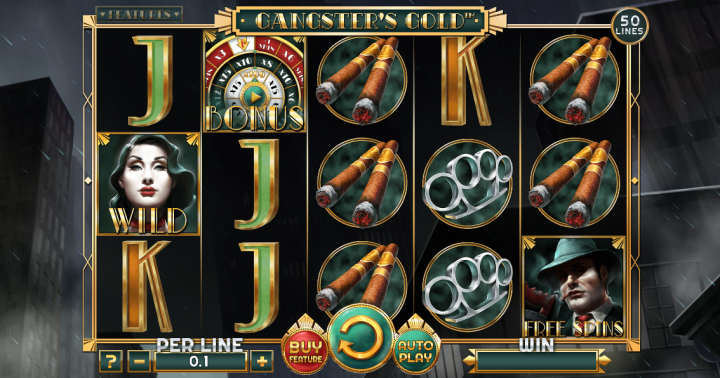 The game comes with 50 different pay lines which is a pretty high number for the classical slot. Except for the paying cards the game has special symbols which are the wild card with the main character, a female gangster on it, that can replace any other symbol in a winning combination, a countdown wild which has a clock as a symbol, bonus symbol, with the roulette board on it, which triggers a bonus round, male gangster’s symbol which appears only in the first, third, or fifth reels and triggers a free spin round, and a mystery symbol, which has guns on it and turns into a random symbol except the bonus, wild, or free spins symbols.

Age of Pirates is another Spinomenal BTC slot that was released in April of 2021 and has quickly gained popularity because of its satisfying aesthetics and juicy bonuses. RTP of the slot is 96.29% which means that you are able to win 96.29% of the total bet at some point. The paytable of the game offers a pretty high amount of coins to pay and 45 different pay lines, which is also a high number for the classical slot. Once you start playing, you will see a background of the sea during the storm which also is a battlefield of the pirate ships. 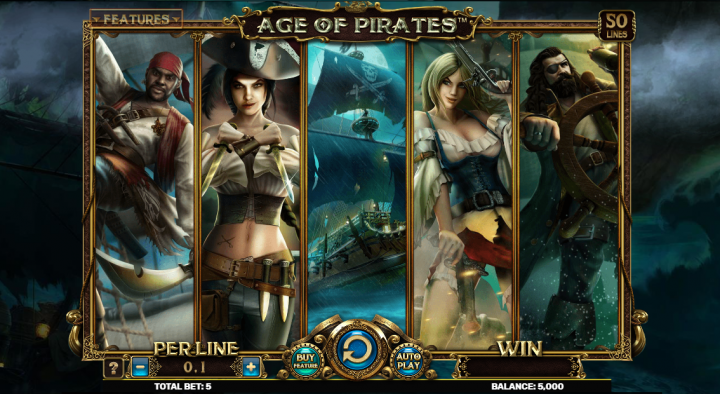 Age of Pirates has a classical playing board with five reels and three rows, but some of the symbols fill the entire reel. The lower paying symbols are cards from 10 to Ace which have fish skinlike patterns on them, and the higher paying symbols are pirates and their ship. The game also has wild symbols, which can substitute any other symbol in the winning combinations, free spin feature, and win multipliers. Those components with the impressive visuals and high-quality graphics, make Age of Pirates very entertaining and satisfying.

Story of Hercules is one of the best Spinomenal slots as it has become instantly popular when it was released in 2019. The game is a high volatility slot and the RTP is 96% which means that players are able to win 96% of the total bet at some point. Story of Hercules comes with 50 different pay lines and a classical playing board with five reels and three rows. As you may have already guessed the main character of the game is a Greek demi-god, Hercules, and the concept of the game is connected to his heroic tasks. The lower paying symbols of the game are cards from 10 to the Ace and the higher paying ones are Hercules himself and creatures he had to defeat to complete his tasks. 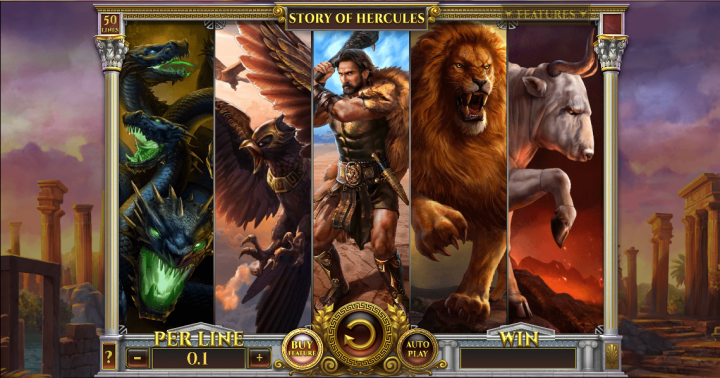 Besides the ordinary symbols, Story of Hercules has special cards which trigger the unique features of the game: There are the wild card that replaces any other symbols in a winning combination and pay x150 bet per line if you ger five of these symbols on the reels. The slot also has x2 and x3 multipliers which raise your chances to win a big amount of coins. Story of Hercules also has to scatter symbols and if you get three of them on the display, the free spins feature will be triggered. The symbols of magical creatures also act as wild cards in a bonus game and each of them has different powers.

Story of Medusa is another Greek-themed Spinomenal casino slot. The RTP of the game is 96.5% which is not overly generous but is not standing over the edge either and the volatility of the slot is above average. The game comes with 30 different pay lines and nine paying symbols which are connected to the game aesthetics as well. Once you start playing you will see a pretty unusual board with five reels and three rows for the first and the last reels, but four rows for the middle ones. 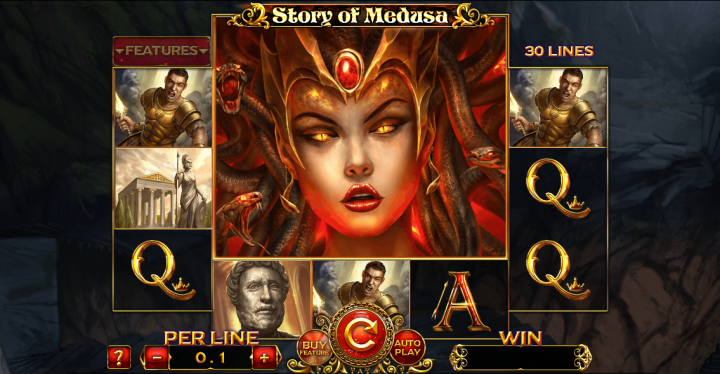 The Story of Medusa has many special features that make the game even more entertaining: Mega symbols which are the higher paying ones, come to 2×2 and 3×3 sizes and one symbol may fill even three reels. The wild symbols which can substitute any other symbols in a winning combination appear only in the first or the fifth reels. The game also has a free spins bonus round which raises your chances of winning big money to the maximum level. Given the circumstances, it will not be unfair to say that Story of Medusa is one of the best Spinomenal slots.

You can say that Spinomenal slots are special at first glance. All of their games have wild cards which can replace any other paying symbol in the winning combinations, free spins, and bonus cards that raise your chances of winning the big money to the maximum level. Some of them even have mystery cards that can turn into other symbols. All these make the games developed by Spinomenal unique, however, the main reason what makes the Spinomenal Slots outstanding is their theme and visuals. Every game has an interesting theme, some of them even are connected to each other and every one of them has high-quality graphics and matching audio. All in all, those are the main factors that make their games special and unforgettable.

Can I play the games developed by Spinomenal for free?

Yes, you can play their slots for free and it is the best way for testing their games and choosing the most suitable one. If you want to find demo versions of all their games in one space, you should visit the official website of Spinomenal. It is also noteworthy that, thanks to its impressive visuals and interesting themes, playing their games for free is almost as entertaining as betting.

Are Spinomenal slots easy to play?

Because of many special features, you may think that the games developed by Spinomenal are complicated but, in fact, you just need to spin the reels and wait for the lucky combination.

Yes, Playing the developer’s games using cryptocurrency is completely possible if you find a casino website that offers crypto services to their clients, for instance, BAO casino, PlayAmo, or Bitstarz.