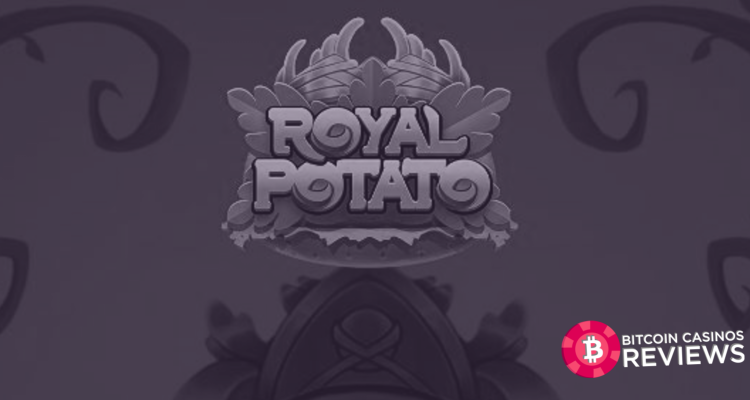 Royal Potato is an online video slot released in 2021 by Print Studios gaming company in association with the popular and reputable Relax Gaming. The game is available for players worldwide to try out their luck and enjoy the cute and cartoonish visuals of the fun slot. If you are looking for an exciting adventure through the kingdom of your favorite vegetables where the potatoes have taken the form of the king and his royal subjects, this extraordinary game is for you.

This slot is not extraordinary with the theme only but its gameplay is exciting as well. With an RTP of 97.2%, it has surpassed the average RTP of casino games which is 96%. Not only that, but the game is highly volatile and even though the winnings are not very frequent, they are huge. The maximum payout of the game will shock you, but we will explain how much you can win later in this Royal Potato review. 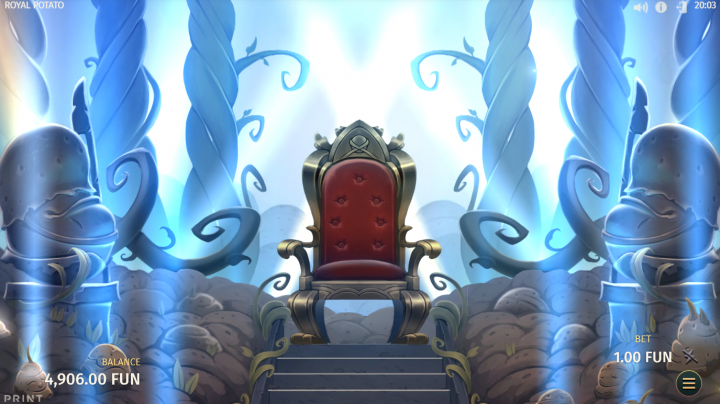 Potatoes in this game are no ordinary plants, they are characters with their very own personalities and cute faces. The game comes with several special features including the Free Spins round and the players have multiple opportunities to take home big wins since the game has 30 pay lines and has the biggest multiplier of 50x the original bet.

In case you are wondering whether you can play the game without having to use desktop devices because you are too busy or you simply find gaming on mobile devices more comfortable, the answer is yes, you can. The slot fits your mobile device perfectly – not only that, but you can even play the demo version if you want to have fun without having to pay real money, or if you just want to try it out. You can find Royal Potato in the lobbies of many online crypto casinos and play it for Bitcoin, Litecoin, or even Ethereum.

Royal Potato is an illustrated slot that has detailed graphics to offer. The characters of the game are potatoes with faces that you would see in children’s storybooks. There are potatoes with faces in the background as well. The setting of the reels is the throne room of the Potato Kingdom. You can see big and long roots of plants and the delicious vegetables planted on the sides of the stairs leading to the big red throne.

The characters of the game are the Potato King – the big-nosed potato on a red background with a big golden crown and the golden details on the sides of the symbol, the Potato Queen – a smiling potato with a purple flower-like crown on its head and a purple glow with also golden details around its symbol. Desiree is a large potato in a purple setting, Yuko is a skinny potato with green leaves as the hair and an orange set, Russet and Kennebec are also royal potatoes with green and blue surroundings, one of them even has a thin mustache. 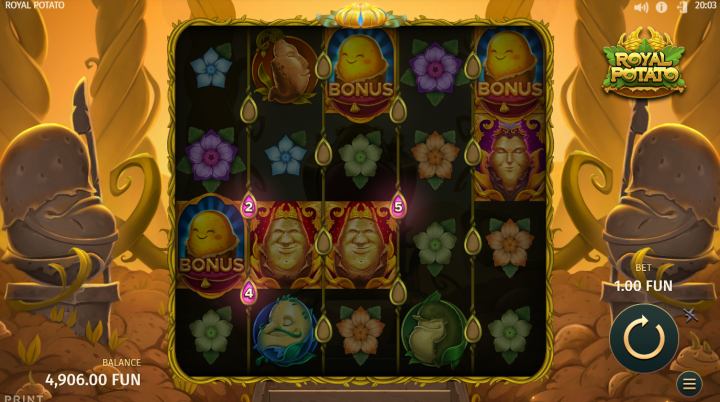 The game comes with special Royal Potato bonus features with the inclusion of a free spins feature, a Jumbo symbol, and the Superspinners. The Jumbo symbol is an adorable and huge potato with a cute and cartoonish smile on its face, as well as a tiny crown on the head. As for the bonus symbol – it is a baby potato wrapped in a blanket.

During the main game, the setting of the reels is a throneroom in the daylight, with greens and yellows dominating the color set. However, once the bonus game occurs the setting gets darker, the day changes to the nighttime and the room gets moonlit with little beams of light shooting up from the ground. There is a magnificent glow that gives the players a mystical feeling.

The audio of the game fits the theme perfectly as it is a piece of royal-sounding music that sounds like it’s played by an organ and violins. The ballet-style music is not all that distinguishes the audio of the slot, Royal Potato also includes sound effects for the spins and winnings. The reels land with a woosh sound, the Bonus Symbols land with a little kid’s celebratory yelp, and during the free spins round the music becomes victorious and more fast-paced.

Royal Potato Rules – How Do You Play It?

The slot is played simply, you only need to hit the spin button and the reels start to roll. However, the game does have several unique additional features that may confuse the new players, which is why this Royal Potato review is here to help. The slot machine has 5 reels and 4 rows, regular symbols, a special bonus symbol – the scatter – which has the ability to trigger free spins, and a Jumbo symbol that appears during the free spins bonus. You have the opportunity to land 30 winning combinations, and the game even has a Superspinner bonus along with the special Royal Levy feature. 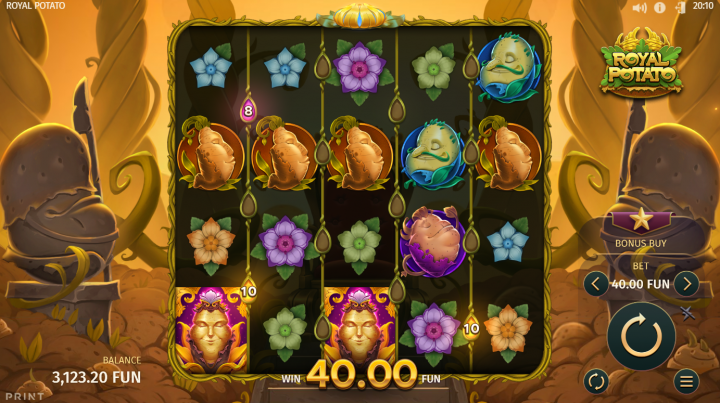 The regular symbols landing on winning combinations give out money prizes, the smallest amount is 1.5x the bet, and the biggest amount you can land is 50x the initial stake. The Supperspinner feature is a unique element of the slot and it’s presented in the form of 14 little colorful drops in between the reels. Each drop during the spin has a random multiplier number on it. If the player ends up landing a pay line crossing one of the Superspinners, the win will be multiplied by the number on the drop. It could be any number up to 10.

The king and the queen are the most powerful characters in the kingdom, so it’s no surprise that only those two symbols can trigger the special Royal Levy feature. Each cube that holds the Queen or the King symbol will reveal a prize that will be increased by all of the Superspinner multipliers on the reels.

The players can enable the Turbo mode to play faster and increase the speed of spins. Press the autoplay button and choose the number of games you wish to play, or even buy the bonus free spins feature.

Royal Potato Payouts – How Much Can You Win?

The game has some big prizes prepared for the players that will excite you. You can bet up to 50EUR on the game, with the RTP of 97.2%. The Superspinner can multiply these winnings by up to 10x and you also get to play the special free spins feature that can be activated with at least 3 of the Scatter symbols anywhere on the reels. The Royal Levy feature is also an exciting addition to the game that gives you big winning opportunities. 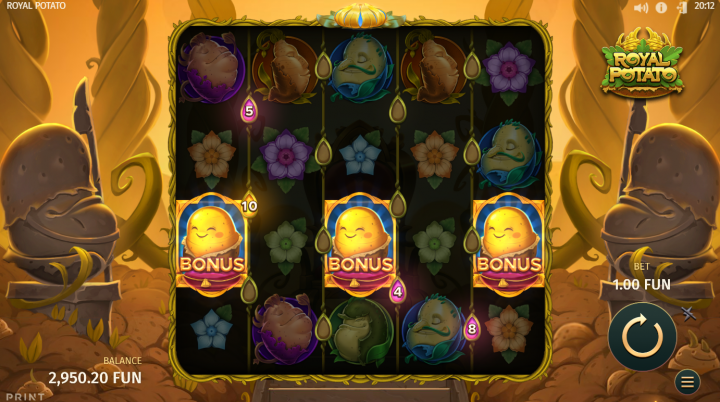 The game has a high-risk level, however, whenever winnings occur the players get huge rewards. The highest-paying symbol of the game – the king pays up to 50x if you land 5 of them at once on the reels. In total, the players have the opportunity to win up to 30 000 EUR with the game!

We already mentioned the special Royal Potato free spins round in the review several times. It is the bonus feature that makes the gaming experience more rewarding for the players since this way they can land prizes by spinning without betting any money. The special feature is triggered by the baby potato bonus symbol and when that happens the entire setting changes with the victorious sound of celebration. 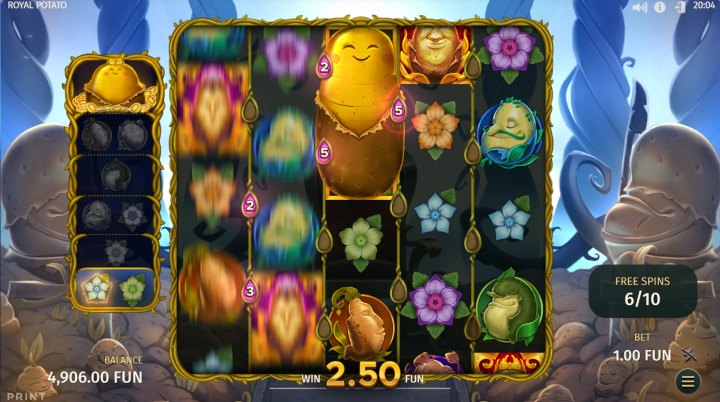 3 special bonus symbols have the power to trigger 10 free spins, 4 symbols – 12 spins, and 5 of the special symbols can activate 14 free spins. The free spins game starts with a sticky Jumbo symbol that takes up the space of 2 rows on one reel. The Jumbo symbol has all of the characteristics of a Wild symbol as it sticks to the reels until the end of the feature and has the power to substitute for some of the other symbols.

What Is The Royal Potato RTP?

The RTP of the Royal Potato online video slot is 97.2%. If you have been around casino games for a long time, you will know that this is a very big gift to the players, as the usual RTP of casino games is 96%.

Can I Play Royal Potato For Crypto?

Yes. Royal Potato is available for cryptocurrencies at the online crypto casinos that keep the game in their lobbies. The slot can be played for Bitcoin among other digital coins, creating a huge convenience for the players

Does Royal Potato Have A Bonus?

Yes. Royal Potato has a special bonus game of free spins that the players can either buy using the bonus buy feature, or activate by landing 3 or more of the Bonus symbols on the reels, you can activate 10, 12, or 14 free spins depending on the number of the Scatter symbols you hit at once. The game also has a special Superspinner feature that gives the players a chance to multiply their winnings by up to 10x.