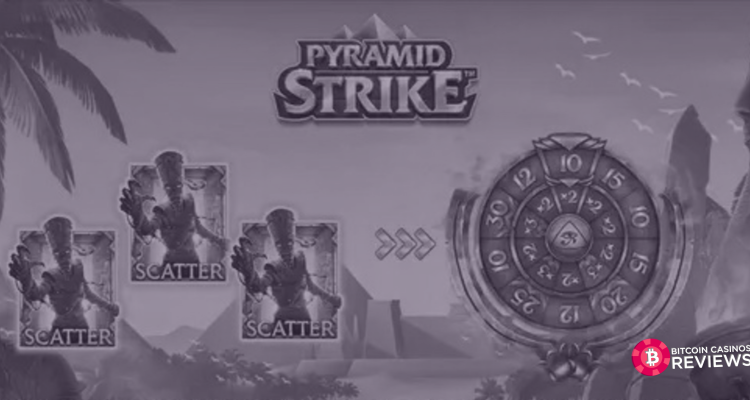 The Pyramid Strike crypto casino game was developed by Stakelogic and released in December of 2021. The game has instantly gained the love of players from all around the world as the main theme of the game is Ancient Egypt which is a favorite for many people. Pyramid Strike comes with high-quality gameplay, impressive visuals, and special features that make the slot even more entertaining.

Besides the creative content, the slot has pretty attractive attributes which are the important part of rating the game. Pyramid Strike is a high volatility slot which means that landing a pay line may take long but the slot pays generously. High volatility also means that the risks of losing your winnings are high but the risk is an integral part of slot games and all you need to do is play responsibly.

The RTP of Pyramid Strike is 95.8% which is not considered a very high number but it is not standing over the edge either. The RTP of the slot shows how many percents of your bet can you win theoretically and in the case of Pyramid Strike, the players have an opportunity to win 95.8% of their whole bet.

Once you start playing, you will see a classical playing board with five reels and three rows. The slot comes with 20 different pay lines and eight paying symbols. The lower-paying symbols are ordinary cards from the Jack to the Ace while the higher-paying ones are Ancient Egyptian deities.

The maximum win in the game is 3140x your total bet which is pretty generous for the classical slot like Pyramid Strike. The minimum bet of the game is 0.2 while the maximum is 20 which makes the game interesting and suitable for players with any playing budget.

It is noteworthy, that Pyramid Strike is a crypto-friendly slot game which means that you can play the slot for crypto and earn your winnings in digital currency as well. All you have to do for that is to find an online casino website that offers crypto-services to its users, for instance, you can visit 22Bet, mBit Casino, or BitStarz. In this Pyramid Strike review, we are going to talk about the visuals and audio of the game, its rules, and special features, so if you want to find out every little detail about Pyramid Strike, all you need to do is keep reading the review.

The content of Pyramid Strike is built on the culture of Ancient Egypt and the whole slot revolves around this aesthetics. Once the game is loaded you will find yourself in the Ancient Egyptian temple surrounded by statues of pharaohs and torches that spread the light of the fire. The playing board of Pyramid Strike has a golden frame that is decorated with Egyptian hieroglyphs. The playing symbols of the slot also have the aesthetics of Ancient Egypt as you can see Egyptian deities among them. 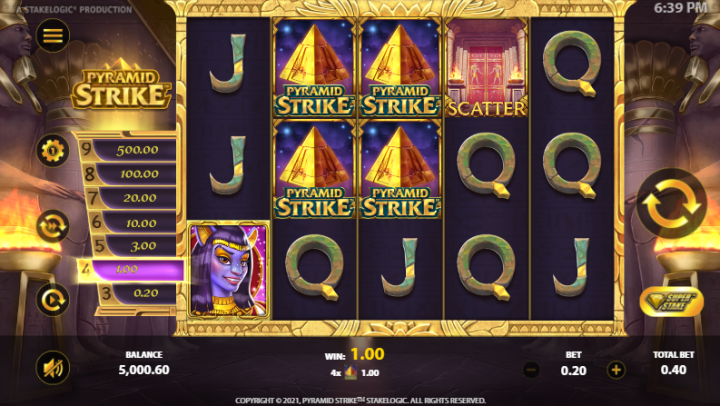 Pyramid Strike Rules – How Do You Play It?

The rules of Pyramid Strike are pretty simple, just like the other slot games, but if you are a beginner in gambling, you can use our review as a Pyramid Strike guide. First, you need to select your bet from 0.2 to 20 and you can change it before any spin in the base game. Your Balance, winnings, single bet, and total bet are displayed at the bottom of the reels. 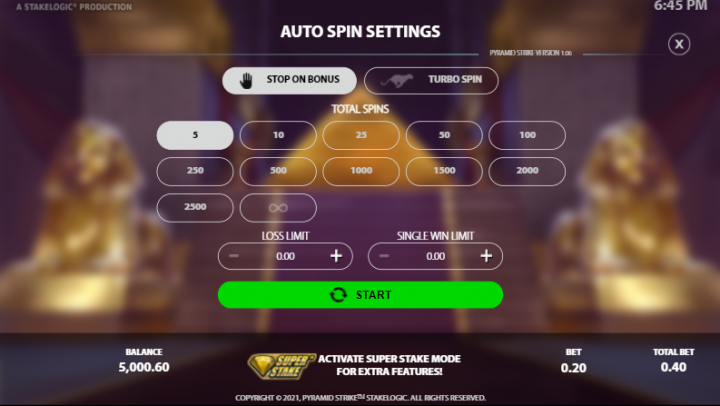 Once you choose the suitable options for you, you can start spinning the reels from the spinning button which is located on the right side of your screen. If you are too busy or just lazy to click the spinning button before each spin, you can use the autoplay feature which is on the left side of the reels, and spin the reels automatically from 5 times to the limitless spins. You can also regulate your loss and win limit from the menu which will cause stopping the automatically spinning reels on the selected option. The game also has a turbo mode which will make the reels spin faster and save your time.

Pyramid Strike Paytable – How Much Can You Win?

Pyramid Strike comes with 20 different pay lines and eight paying symbols. The maximum win you can achieve is 3140x your total bet which is pretty generous for the classical slot game. You can earn your winnings in cryptocurrencies, for example, BTC or ETH, if you play Pyramid Strike on an online casino website that offers crypto services to their clients.

Pyramid Strike has many special features that make the slot much more entertaining and satisfying. The wild symbol of the slot, which is Scarab, Can substitute all symbols in the winning combinations, except for the bonus symbol and the scatter symbols. Besides that, the wild card will pay the exact same amount of coins as the Anubis symbol if you manage to get a pay line with Scarabs only.

Pyramid Strike also has bonus symbols which are pyramides and they trigger the Pyramid Strike bonus feature. They will award a cash prize which is depended on the number of bonus symbols you get. The game also has a Super Stake feature which allows the player to increase the range of bonus prizes by doubling their bet, but remember that the feature does not increase the paytable.

Does Pyramid Strike have a bonus round?

Yes, the Pyramid Strike has a bonus round that is triggered by the bonus symbols of the game.

Is winning in Pyramid Strike easy?

The game comes with 20 different pay lines and many special features that help you increase your winnings but the main component for success is your luck.

Where can I play Pyramid Strike?

Pyramid Strike is offered on many online casino websites but you have to choose according to the currency you are going to play the game for, for instance, if you want to play Pyramid Strike for crypto, then you should visit 22Bet, mBit Casino, or BitStarz.