Mining Fever Review – Your Adventure In The Underground World! 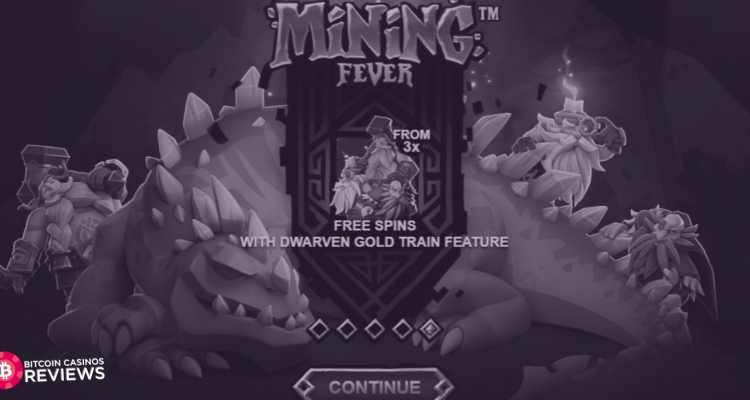 Mining Fever is a video slot developed by Rabcat and released in 2020. Despite being brand new, the game has already gained popularity with experienced slot players and with beginners too. The game took its place in the hearts of players because of its satisfying theme and compelling features. Mining Fever is a low volatility slot and the RTP of the game is 96.13% which means that you are able to win 96.13% of the whole bet at some point.

The game is a classical video slot with 5 reels and 3 rows and a pretty generous paytable for the low volatility slot, but there is nothing classical about the pay lines. The maximum number of pay lines, which is 243 gives you endless opportunities to win. The maximum bet of the game is 40-pound sterling, while the minimum is 0.2-pound sterling, which makes the game available and interesting for players with any budget. Mining Fever has many unique features, which make the game outstanding and very enjoyable, for instance, scatter symbols, free spins, various wild cards, and in this Mining Fever review, we are going to talk about every single one of them. 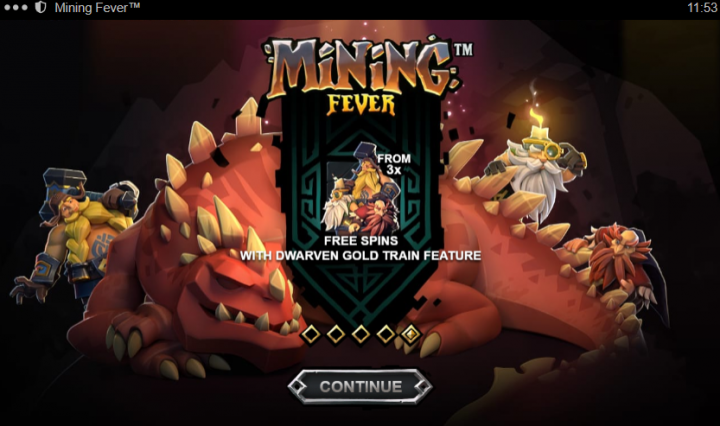 The Visual of the game is one of the main components to rate the game and Rabcat had not disappointed its fan in the case of Mining Fever either. The theme of the game is Golden fever and the playing process is held in the mine and high-quality graphics make the game even more enjoyable. Once you load the game you will see a background of an underground mine passage with the rails and a track loaded with rocks. that moves without stopping.

You can also see rooms and candles in the background and the game is held in the light of those candles. The board is wooden and kinda looks like a part of the mining track. There is an oil lamp hanging on the board which was one of the main attributes of miners. We can see the game logo written in brown, which may remind you of the old signboards, on the top of the reels. The symbols of the game are also thematic and have the aesthetic of the underground world. The lower symbols are the cards from Jack to Ace and are made of stone. Mined goods, tablets, rings, treasure boxes, crowns, and wild symbols, all carry a reminder of mines.

The characters of the game are dwarfs which are also thematic because, according to most of the movies and ancient folklore, dwarfs have been miners. The characters have different skills like drilling, bombing, or hammering and help you in various ways. The Audio of the game is also pretty cool with moaning sound effects, which remind us of the hard work of miners. The music also matches the aesthetic of the game and makes a satisfying accompaniment for the playing time, but if you are not a big fan of music, you can simply mute it using the sound button. 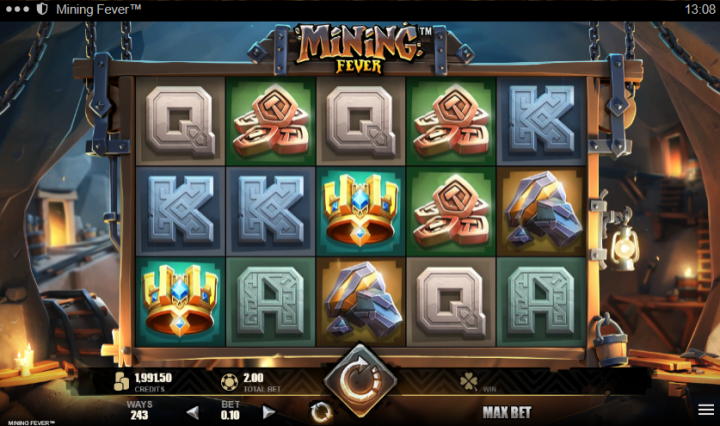 Mining Fever Rules – How Do You Play It?

Just like other video slots, playing Mining Fever is pretty simple, but if you want to read a detailed description of everything, you can use this review as a Mining Fever guide. All you need to do is spin the reels using the spinning button in the center of your screen and wait for the winning combination. If you are too busy to do that, you can use an autoplay button which is on the left side of the spinning button, and spin the reels automatically ten, twenty-five. fifty or a hundred times.

Your win, credits, and total bet are placed under the reels and you can check them and regulate the bet from 0.01 to 2 anytime. The bet is multiplied by a fixed multiplier of  20 to determine the total bet per spin. All wins are calculated per way with your selected bet and not with the total bet. The game gives us 243 ways to win which is the maximum for 5 reels and 3 rows slots. Winning combinations trigger from left to right and the longest valid combination per way is paid. The game has 4 different kinds of wild cards which are the mining tools golden symbol, bomb symbol, gold coins symbol, and the dwarves symbol.

Each wild card can replace any other symbols in a pay line. As we already said, there are three dwarf characters in the game and each of them has an individual mining skill. There is Driller with one star, Bombur with two stars and Thundar with three stars and each of them represents the special Mining Fever Bonus. 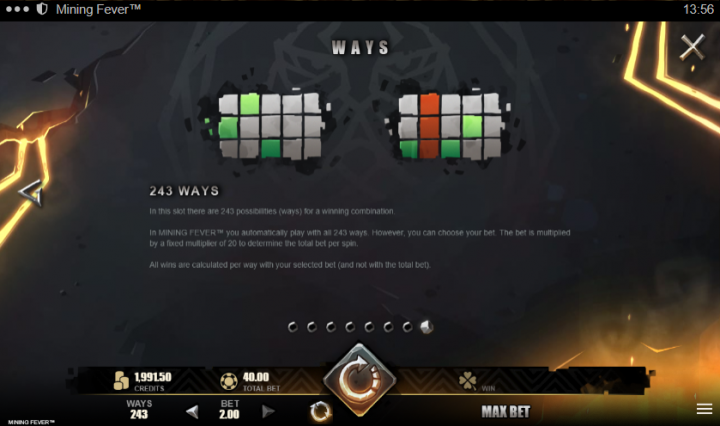 Mining Fever Paytable – How Much Can You Win?

Besides replacing all symbols in winning lines, The mining tool’s wild card can also pay you 1000 coins if you get five of these symbols in the right combination. As you can see, the paytable of the game is very generous, but we have to say, that playing Mining Fever free is almost as entertaining as betting. 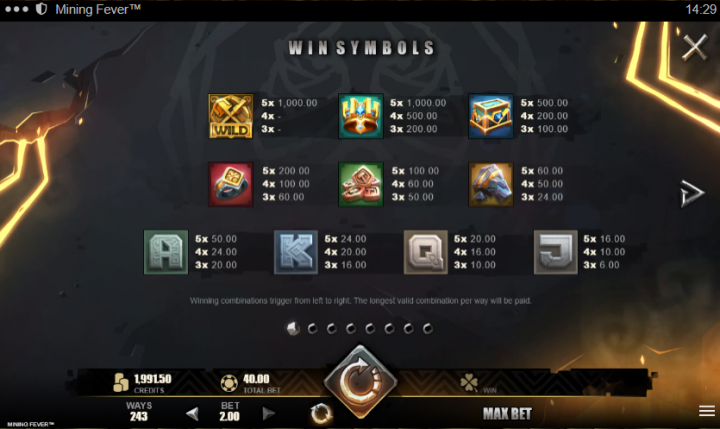 The impressive visual is not the only thing that makes Mining Fever so entertaining and interesting. The game has many unique features which make the players chained to their screens. First of all, the game has four different wild cards and all of them can substitute any other symbol in a winning combination. There is a bomb wild card, golden coins wild, dwarf wild card, and mining tool’s wild symbol, which also pays the maximum win from the paytable if you get five of them in a pay line.

There are three dwarves scatter cards in the game with skill-related names: Driler, Bombur, and Thundar and they also have a special offer for us. They trigger Mining Fever free spins, which is very helpful when it comes to winning a big money. When two identical dwarves appear on the screen, you will win one or two free spins, and the rules of using them are depended on the dwarf which you used to win the free spins. Each dwarf offers a different bonus round and the best option is Thundar which has three stars, then Bombur with two stars, and finally Driler with only one star. 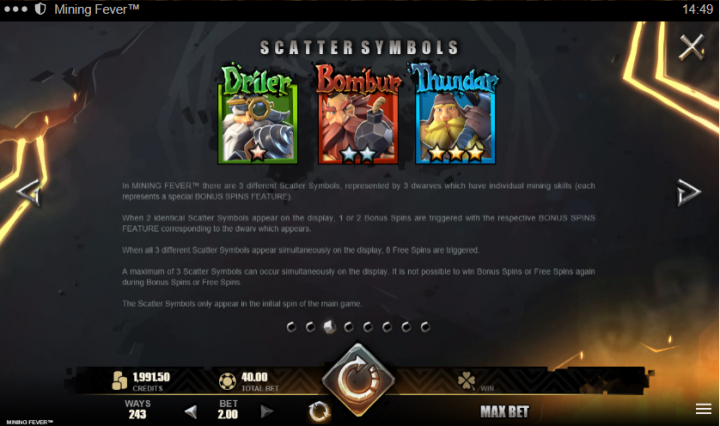 The Bonus Round of Mining Fever

As we already said, There are three scatter dwarves in the game and each of them offers a different kind of game during the free spins. The visual of the game does not change much in the Mining Fever bonus round, but we can not say the same about the rules. In case you win by getting two Driler cards on the reels it will give you one free spin and activate Driler’s Dwarven Drill bonus round. During the round, one reel is selected as a gold vein, Driler drills through the reel and place the wild symbols on the whole reel. This way, your chances of a big win are raised.

If you win with Bombur symbols, two bonus spins are awarded, but Bombut only appears on the second and fourth reels. During the Bombur Dwarven Bomb free spin bonus your chances are even higher. On the first spin of the round Dwarven bomb is placed randomly on the board and acts as the wild card, but on the second spin the bomb explodes and three or four wild cards are randomly distributed over the display.

If you win by Thundar symbols, one free spin is awarded and Thundar’s Dwarven hammer bonus is activated, which is the best opportunity to win big money compared to other dwarves’ offers. Once the round is started, Thundar appears on the screen and heats two reels, either first and second, or second and third, with his hummer. The two reels, which took the heat, will disappear from the board and will be replaced with randomly selected same symbols. It means that you automatically have two reels with the same symbols and getting the right combination is very easy.

If you are lucky enough to get all three scatter symbols on a spin, then you will be awarded eight free spins. The rules are different for this round too and the free spins are played with the Dwarven Gold Train feature. All dwarves drive their golden train through the reels and leave the trail of wild symbols behind them. The golden train contains three wagons and all of them are visible on the board. It starts the ride on the first reel and with each spin, it moves in a random direction vertically and one reel right horizontally. Once it disappears from the board, the ride starts again from the first reel. Every wagon acts as the wild symbol during the Dwarven Gold Train bonus round. 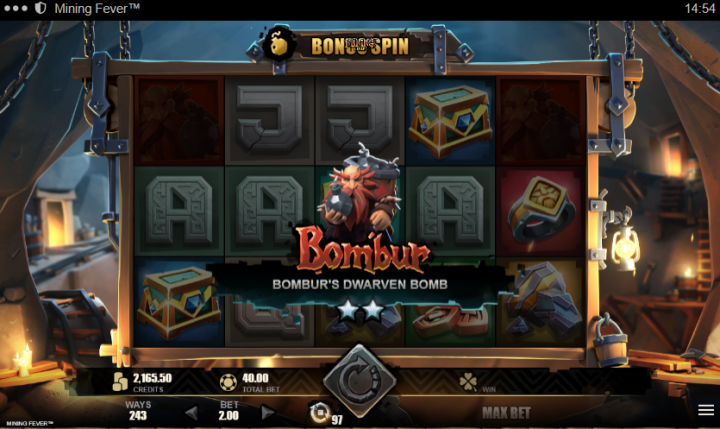 Can I play Mining Fever for free?

Yes, you can, and actually, thanks to its unique features and high-quality graphics, playing the game for free is almost as entertaining as betting.

Is there a bonus round in Mining Fever?

Yes, it is possible to play Mining Fever using cryptocurrency if you use the casino website which offers crypto services to their customers. In the twenty-first century, there are various websites like that, for instance, Avalon78, 7Bit Casino, or PlayAmo.