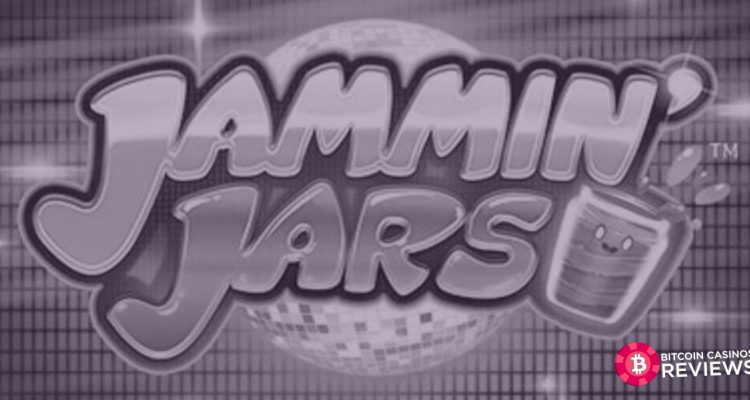 Jammin’ Jars is a video slot developed by Push Gaming and it already has a second part which was released in June of 2021. The game is new but it has already gained popularity with the players. Jammin’ Jars is not a classical slot game as it has 8 reels and 8 rows and gives you an extreme opportunity to win. The game is a high volatility slot which means, that it may take a long to win, but once you win the prize will be worthy of waiting. The game has unique features, which make even this waiting process interesting.

RTP is 96.83% which is not overly generous but is pretty high. The maximum coin size is 100, while the minimum is 0.2 which makes Jammin’ Jars acceptable for the players of any budget. The game is very satisfying not only because of its endless opportunities but for its dazzling visual and juicy bonus. In this Jammin’ Jars review, we will talk about every aspect of this amazing game. 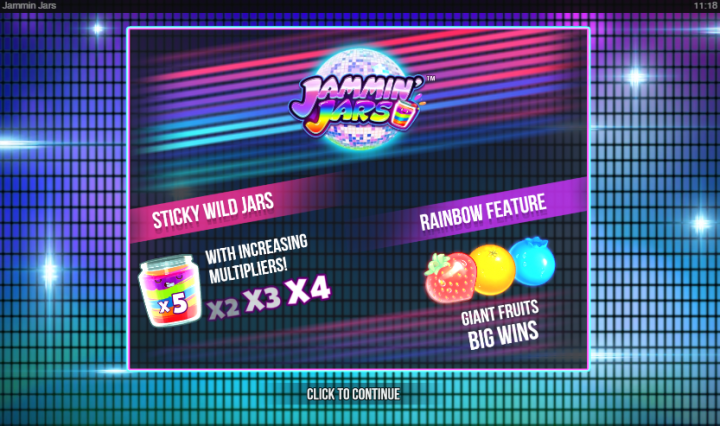 Dazzling is the best word to describe the bright visual of Jammin’ Jars. The game catches our eyes with cheerful colors, high-quality graphics, and lots of sparkles. Once you start the game you will see an 8×8 playing board on your screen which has fruit symbols on it. Symbols are shiny and remind you of the freshness of fruit as they got water drops on them. The wild symbol is a jar full of colorful juice which has a little cute face on it and jumps from excitement once you get a winning combination.

There is a disco ball with the game logo on the left side of the reels. Both, the disco ball and the Jammin’ Jars logo are colorful and shiny. The background is also the surface of the Disco ball mostly with blue and green corols, lots of sparkles, and flashlights. Once you score a big win, flashlights go crazy, the reels start to shine in different colors and make everything even more cheerful. If the prize is even bigger the disco ball with the writing “fruity win” appears on the screen. If the winning amount increases the “fruity win” is replaced with “juicy win”, after that, there is a “super juicy win” and finally, you will get ” Jammin’ win” if you are lucky enough.

It is obvious at a first glance that the game is very entertaining. Jammin’ Jars is also a great option for those who love music accompaniment while playing. The audio side of the game is as fun and enjoyable as the visual. Jammin’ jars has fun music and cool sound effects to congratulate the winners and make the whole process even more entertaining. If you are not a big fan of the music you can simply mute the game by clicking the sound button on the bottom left side of your screen. 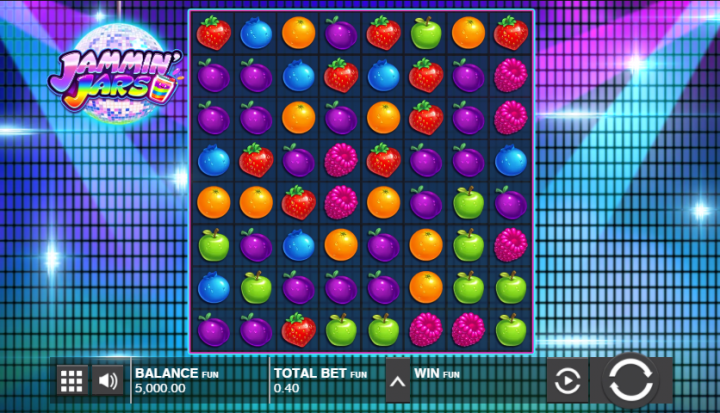 Jammin’ Jars Rules – How Do You Play It?

You may think that playing Jammin’ Jars is hard because of its high number of reels and rows, but in fact, it is pretty simple. If you find any difficulties while playing you can use this review as the Jammin Jars guide. The game has 6 regular fruit symbols, which are strawberries, oranges, raspberries, apples, plums, and blueberries, and a wild card symbol which is a fruit jar. The Jar can substitute any other symbol in a winning combination.  The pay lines are very simple: you just need to get 5 or more symbols in a straight line vertically or horizontally and the prize is yours.

You just have to spin the reels from the spinning button on the right side of your screen and wait for the lucky click. If you are too busy or lazy to do that, you can use the autoplay button, which is on the left side of the spinning button, which offers a wide choice of auto spins from 10 to 100. Once you get a winning combination, instead of spinning again, the symbols collapse and free the space for other fruit. That feature lets you win multiple times during one spin. You also can regulate the loss limit from x5 to x100, a single win limit from no limit to x100, and a bet from 0.2 to 100. 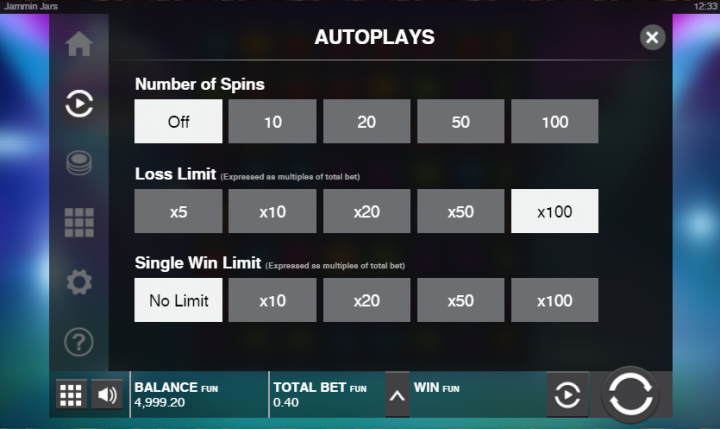 Jammin’ Jars Paytable – How Much Can You Win?

As the high volatility slot, Jammin’ Jars offer a generous paytable. As I already said, the pay lines are simple. Once you get a straight line of five or more symbols it pays you matching coins to the amount of vertical or horizontal lines and the same symbols which are connected to the line slightly. The lowest symbol is blueberry which pays 0.04 coins if you get five of them in a winning combination, 0.06 for six symbols, 0.08 if you get seven, 0.12 if you get eight, 0.24 for nine, 0.32 if you get ten or eleven, 0.4 if you get twelve, thirteen, or fourteen symbols, 1.2 if you get 15-19, 1,6 for 20-24 symbols, and 4 coins if you are lucky enough to get twenty-five or more symbols in a winning combination. 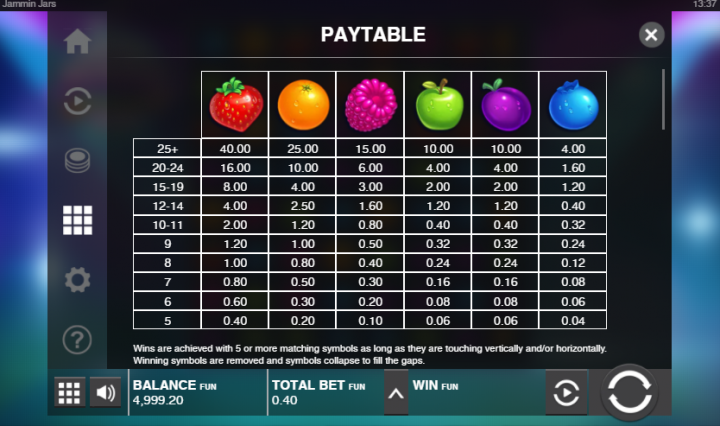 Jammin’ Jars is a special slot not only for its dazzling visual and impressive paytable but for the unique features that the game offers. besides the ability to replace any other cards in winning combinations, the wild card of the game enables the bonus round. If three or more Jam Jar symbols fall anywhere on the reels, the free game feature is triggered, which basically is a jammin’ Jars Bonus. Once you got your jars, the game gives you six Jammin’ Jars free spins.

Another opportunity offered by the wild card of the game is multipliers. When the collapse occurs, all jam jars are held in place. Every jar card instance has a multiplier associated with it. The multiplier can be anything from 1x to 5x. The current multiplier value is applied to any win that the jam jar symbol instance contributes to. If a jam jar symbol contributes to a cluster win, the symbol will randomly move to an adjacent, vacant position before the following collapse occurs.

The other unique feature of the game is the rainbow round. After any non-winning collapse or cascade, there is a chance to win a rainbow round. Once you win this feature, the rainbow animation covers the whole board and lives one or more giant fruit symbols of the same type behind it. The piece of the board where the giant symbol is will be converted to one symbol, the same as the giant symbol is, and will bring a prize to you. 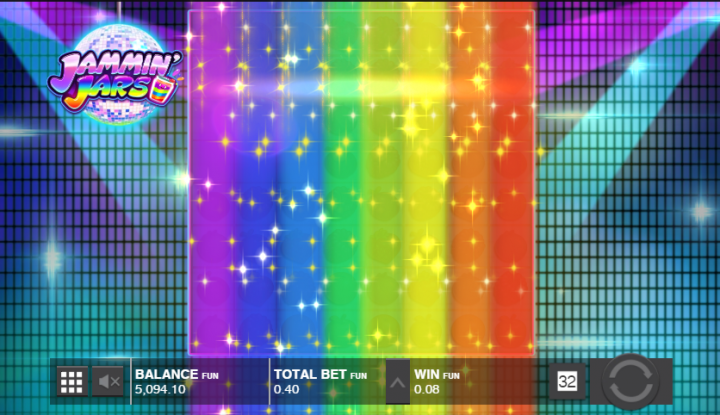 Is Jummin' Jars easy to play?

Yes. When you first see the board, it may seem difficult, because jammin’ jars is not a classical slot game. It has eight reels and eight rows, but actually, the big board only helps you to win and does not make anything harder. Jammin’ Jars is easy and very enjoyable to play. Just like other slot games, you just need to click the spinning button.

Does the game have a bonus round?

Yes, the game has a bonus round. You need to get three or more jam jar symbols, which also is a wild card of the game, to win 6 free spins and start enjoying your bonus round.

Are there any special features in Jammin' Jars?

Yes, Jammin’ Jars has many unique features, for example, rainbow round which makes even non-winning collapses wishable and interesting, or Jammin’ Jar multipliers which can multiply your win two, three, four, or five times if you get a wild card in a winning combination.

[/su_spoler]
Can I play the game for free?

Yes, you can play Jammin' Jars free. It may sound surprising but, thanks to its dazzling visual and audio and intriguing features, playing the game without a real bet is just as entertaining as gambling.

Playing Jammin’ Jars using crypto is completely possible if you are using the casino website which offers there clients crypto services. In the twenty-first century, there are many casinos that offer both, crypto services and Jammin’ Jars on their website, for instance, Avalon 78, BitStarz, or 7Bit Casino.