Home / Guides / Dinopolis Review – Your Adventure In To The Juristic World!
Guides
by Mia Bassham on December 17, 2021

Dinopolis Review – Your Adventure In To The Juristic World! 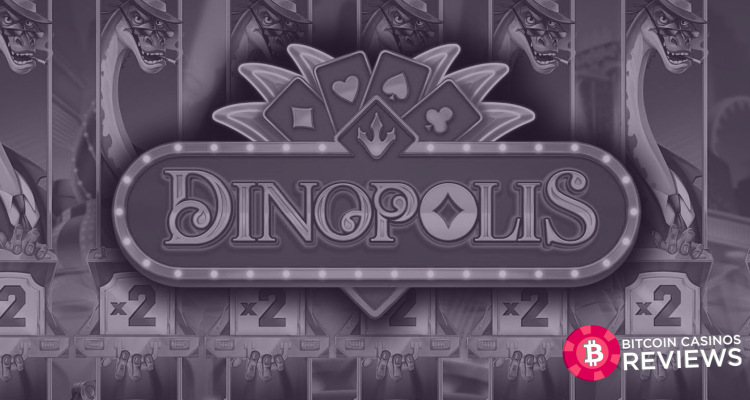 Dinopolis crypto casino slot was developed by Push Gaming and released in 2021. Besides being brand new, the slot has already managed to gain the love of players from all around the world. As you may have already guessed from the name of this slot, the main theme of the game is dinosaurs. Dinopolis comes with impressive visuals, fun features, and attractive attributes.

The RTP of the slot is 96.4% which means that the game gives players an opportunity to win 96.4% of the total bet at some point. This number is considered high, but 96.4% is not overly generous. Dinopolis is a High volatility slot which means that the time between the wins may be long but the prizes will be worthy of waiting, It also means that the risks of losing your winnings are high and you should play responsibly.

The playing board of Dinopolis comes with five reels and changing number of rows. The slot has 576 different pay lines which is a pretty high number for a high volatility slot. The lower-paying symbols are casino-related tools like dice, chips, cards, and money, while the higher-paying ones are game characters. The maximum bet of Dinopolis is 100 while the minimum is 0.1 which makes the game available for players with any playing budget.

It is noteworthy that the slot is crypto-friendly and players can bet on several digital currencies if they find the casino website which offers both, crypto services and Dinopolis on their website. In this Dinopolis review, we are going to talk about the visuals of the game, explain how to play the slot, rate its special features, and paytable, so if you want to find out more details about Dinopolis, just keep reading!

As we have already said, the concept of Dinopolis is built on Dinosaurs and the whole game revolves around this theme. Once you start playing the slot, you will find yourself in the city of Dinosaurs surrounded by the city dwellers who are dinosaurs dressed like humans. Among other buildings, you will even find a dinosaur statue of freedom in the background. 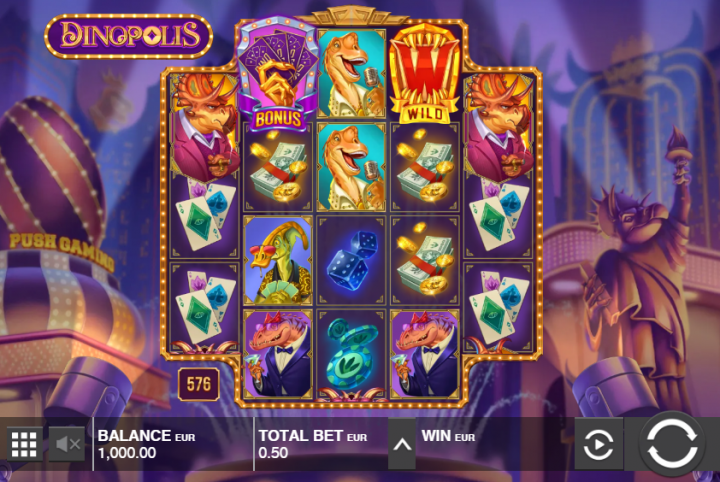 If you are a fan of listening to good music while playing, Dinopolis is the right slot for you as the gameplay is accompanied by tasteful jazz music, just like in real casinos. If you do not like the musical accompaniment, you can simply mute the game from the sound button, which is located at the left bottom of your screen. The slot gives you a vibe that the humans did not manage to develop and the highest race of the planet are dinosaurs. The interesting theme combined with high-quality graphics and cheerful colors and matching audio creates an entertaining playing environment and unforgettable experience.

Dinopolis Rules – How Do You Play It?

The rules of the Dinopolis Bitcoin slot are pretty simple, but if you are a beginner in playing slots, you can use this review as your Dinopolis guide. First of all, you need to select your bet, which is the coins amount you are going to play for each spin. The range of the bets in Dinopolis changes from 0.1 to 100 and you can reselect the bet after any spin in the base game. Your balance, total bet, and wins are displayed at the bottom of your screen. Once you choose the suitable bet, all you need to do is click the spinning button, which is located on the right side of the screen, and wait for the winning combinations. If you are too lazy to click the spinning button before each spin, you can use the autoplay feature. The autoplay button, which is located on the left side of the spinning button gives you an opportunity to spin the reels automatically from 10 to 100 times. 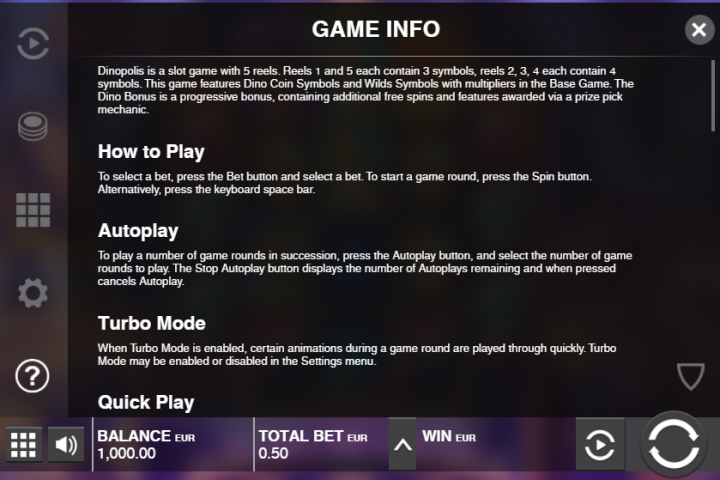 You can also select the loss limit from the x5 to the x100 and a single win limit, which express as a multiplier of total bet from the no limit to the x100. Besides that, you can enable the Turbo Mode from the game menu which is recommended if you want to play quickly. The mode makes some animations move faster and you can even skip some of them from the space bar. As I have already said earlier in the review, the slot comes with 576 different pay lines which means 576 different possibilities on every spin. Your win is awarded when a combination of three or more matching symbols appear on adjacent reels ( starting from the leftmost one).

Dinopolis Paytable – How Much Can You Win? 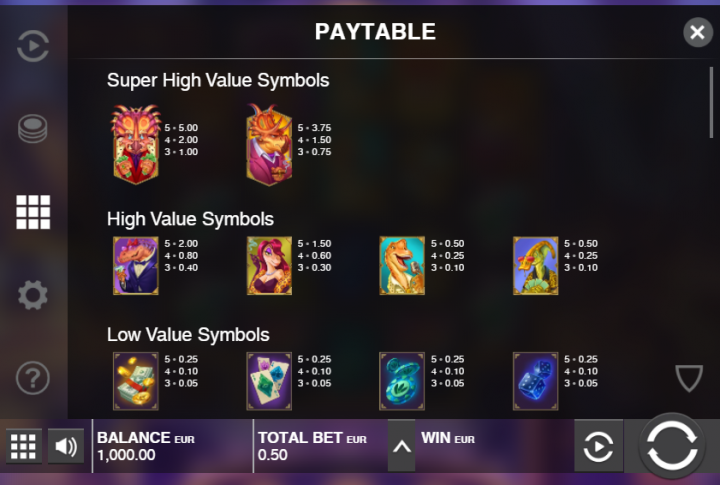 Dinopolis has many special symbols and unique features which make the slot even more entertaining and satisfying. The wild card of the slot, which is an open mouth of the dinosaur, can substitute all paying symbols, except for the scatter symbol, in the winning combinations, and this way, it makes landing a pay line a lot easier. Besides replacing the paying symbols, the wild card comes with a multiplier with a value of either x2 or x3 and it results in increased winnings. 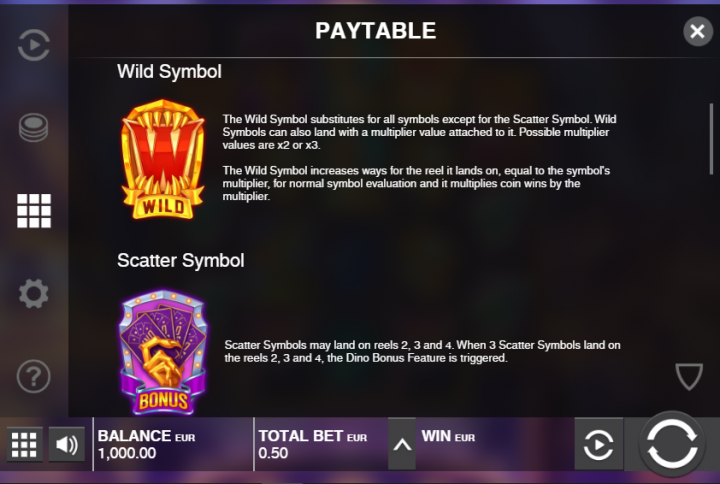 The dino coins symbols, which appear on the first and the fifth reels, can award 5, 50, 100, or 1000 coins if you manage to form, at list a three of a kind combination with wild cards. The exact number of the awarded coins is written on the dino coin symbols.

The scatter symbol of the slot, which is a claw of the dino with cards in it, triggers the Dinopolis bonus feature. These symbols land only on the second, third, and fourth reels and once you manage to land three or more dino claw symbols at the same time on the reels, the bonus round begins!

The bonus round of Dinopolis comes with many special features. At the beginning of the round, you have to play with your fortune and pick two cards. On the first try, you will get either the sticky stack wild symbol, the single reel multiplier booster, the All reel multiplier booster, or the Golden card.  The sticky stack wild adds the expanded wild symbol on the second, third, or fourth reels with a 2x multiplier. The wild card fills the entire reel and it stays on the reel till the end of the bonus game. 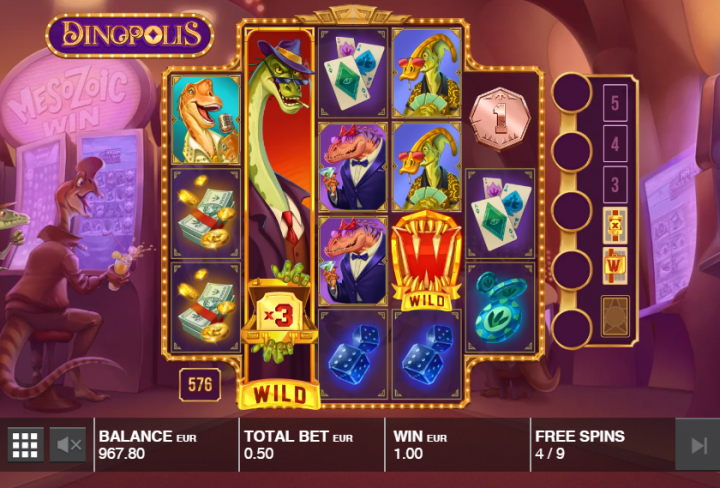 The single reel multiplier booster selects the random reel with a sticky stack wild and increases its multiplier by 1. The all reel multiplier booster increases the multiplier of all sticky wild cards by 1 and the golden card will award two extra features pick! The card which is picked second will tell you how many Dinopolis free spins you won. Once the selection is complete, the background which was the city earlier changes into the casino and the round starts!  During the bonus, you can collect dino coins and once you get five of them, you will enter the new level of the bonus round.

What is the RTP of Dinopolis?

The RTP of Dinopolis is 96.4% which means that at some point there is a possibility to win 96.4% of your total bet while playing the slot.

Can I play Dinopolis free?

Yes, You can play Dinopolis free and it is the best way to test how the game’s attributes work together and whether Dinopolis is suitable for your taste and playing budget.

Because of the unusual playing board and many special features, you may think that Dinopolis is somehow complicated but the fact is that all you need to do is spin the reels and wait for the lucky combination.

Does Dinopolis have a bonus round?

Yes, Dinopolis has a bonus round which can be triggered by landing three scatter symbols anywhere on the reels at the same time. The bonus round comes with free spins and an additional prize which is depended on your luck and intuition.

Where can I play Dinopolis?

There are many online casinos that offer Dinopolis on their website but first, you have to consider which currency you are going to bet on. For example, if you are going to play Dinopolis for crypto, you can visit Bitstarz, Avalon78, or PlayAmo.