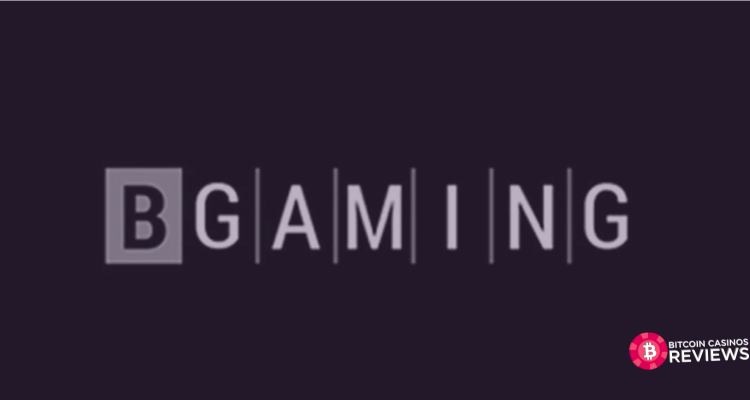 BGaming is a software development company that came to life in 2018 but has been creating online games since 2012. The name of the developer drops a hint of the company’s origin as its first letter, “B” stands for Belarus. BGaming has released more than 70 games so far and still continues to bring joy to the hearts of players with brand new games.

You can find all kinds of slots on their website and all of the games have different content and high-quality graphics. most of the games developed by BGaming are medium volatility slots and RTPs are above 95%.  All of the company’s games have unique features that make them even more interesting and entertaining.  In this BGaming review, we are going to talk about every aspect of the games of this software development company, rate them and conclude if it is worthy of trying or not. Here is the list of Top BGaming slot games: Fire Lightning, Lucky Lady’s Clover, Domnitors Deluxe, Miss Cherry Fruits, and Johnny Cash.

As I have already said, BGaming has created more than 70 games and all of them are pretty entertaining. The games have cheerful colors, high-quality graphics, intriguing visuals, and matching audio. Most of them are classical five reels three-row slot games and offer special features and juicy bonuses to players. Those are the reasons why BGaming games quickly gained the love of players. Every game is well-thought and enthralling, but some of them are still better than others, and when it comes to choosing the top 5 the choice is obvious.

Fire Lightning is an outstanding slot game for many reasons, but one of the main ones is its visuals. The game has a theme of Ancient Greek gods which makes it more mysterious and intriguing. Fire LIghtning is a Medium volatility slot and the RTP of the game is 97.61%. Once you start playing you will see a classical five reels and three rows board with the background of the night sky, which is connected to the aesthetics as most of the cosmic objects have names from Greek mythology. The game comes with 11 paying symbols and 20 variable pay lines. 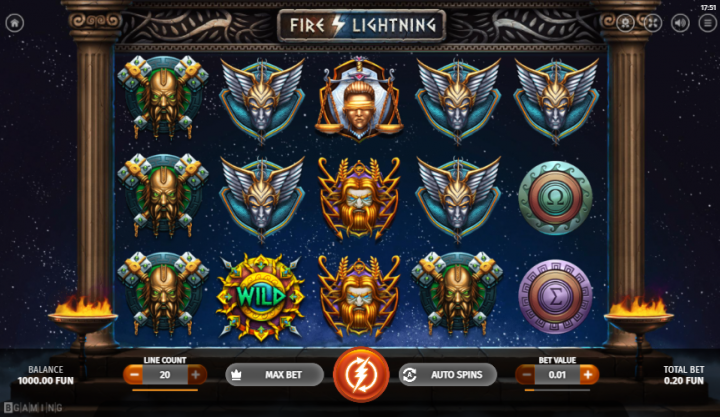 Besides the ordinary symbols, there are wild cards that can substitute any other symbol, bonus cards that give you free spins, and Fire Lightning cards that pay the highest amount of coins if you win with them.  The maximum bet size is $50 while the minimum is $0.2 which makes Fire Lightning available for the players with any budget.  I think, that all these attributes make Fire Lightning one of the best BGaming crypto slots.

Lucky Lady’s Clover has an aesthetic of the Middle Age legends like druids and wood fairies. The main character of the game is also a wood fairie which is a wild card of the game and besides the ability to replace any other symbol in winning combinations, pays the highest amount of coins if you are lucky enough to get the winning lines with them. Lucky Lady’s Clover has classical 5 reels and 3 rows of the board with the background of the magical wood. 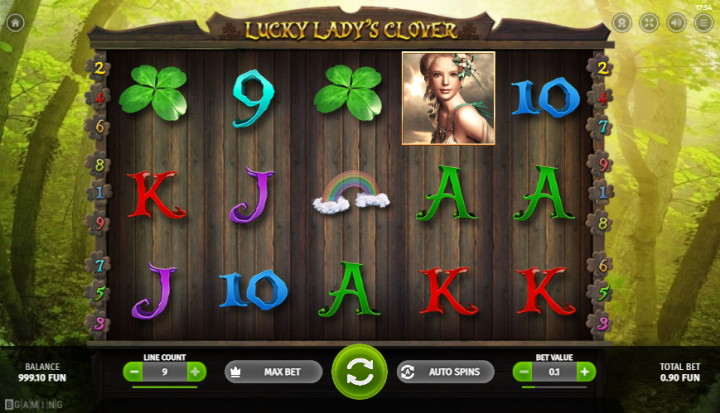 The cards are the superstition symbols of luck like the clover, goblet of golden coins, rainbow, and horseshoe. Those little details create a calm and magical atmosphere. Lucky Lady’s Clover is a medium volatility slot and the RTP of the game is 97.31% which means that you are able to win 97.31% of the whole bet at some point. The game has nine different pay lines which is not a lot, but as a medium volatility slot, the game still gives you an opportunity to get winning combinations pretty often.

The maximum bet of the game is 1 while the minimum is 0.1 which makes the game more interesting for the players with a low budget, but the gaming process is so satisfying and entertaining, that you will fall in love with Lucky Lady’s Clover from the first spin. Lucky Lady’s Clover, for me, is one of the favorite BGaming Bitcoin slots.

Domnitor was the official title of rulers of Romania at the end of the nineteenth century. It will not be surprising if I say that the theme of the game is connected to the Romanian aesthetics of this age. Once you start playing you will see the beautiful view of Romanian mountains with the woods and castles. The playing process is accompanied by music which raises the warrior spirit.

The game has a classical board with five reels and three rows and the symbols are the weapons from the nineteenth century and the castles of Romania. The game has three characters and two of them are the highest winning symbols while the third is the wild card which can replace all other symbols, except the scatter card, in the winning combinations. 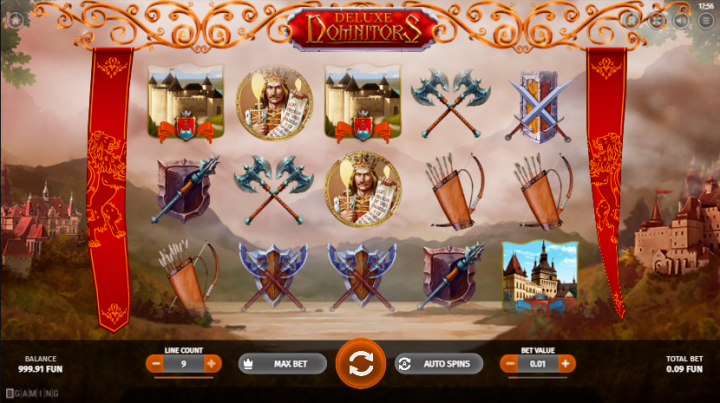 The scatter symbol is a card with the map of three kingdoms on it and if you get three, four, or five scatter symbols on the board, you will win 15 free spins and will be transferred in a free spin bonus, where all wins are tripled. Given the circumstances, it will be completely fair to say that besides the impressive visual, Domnitros Deluc has juicy bonuses and special features to attract the players. Nine different pay lines with thirteen symbols give you dozens of opportunities to win. Dominators Delux is a medium volatility slot and the RTP of the game is 97.3% which means that you will win 97.3% of the total bet at some point.

The minimum coin size is 0.1 while the maximum is 1 which makes the game available for the players with any budget. The Jackpot of Domnitors Delux is 10 000 which is pretty high compared to coin size and, with the generous paytable and impressive visuals, makes the game one of the favorite BGaming BTC slots for players all around the world.

Miss Cherry Fruit is another popular game developed by BGaming. It is a medium volatility slot with the RTP of 95.35% which, to be honest, is not very generous, but is not standing over the edge either. Miss Cherry Fruit comes with 20 different pay lines and eight paying symbols which are fruit such as watermelons, cherries, grapes, and etc. As you may have already guessed the game has the aesthetics of fruit slots machines which is the favorite theme for many players.

Besides the ordinary symbols, the game has some unique cards which offer special features: The wild card, which is Miss Cherry herself, is an expanding wild symbol and, besides substituting all paying symbols in the winning combinations, it gives one free spin once three of these symbols appear on the second, third, or fourth reels. It is also noteworthy that all symbols pay both ways. I think, that its easiness and high quality make the game one of the best BGaming slots.

Johnny Cash has a theme of the wild west as you can see a cowboy cactus as the main character. The game is a medium volatility slot and the RTP is 96.2% which means that you have an opportunity to win 96.2% of the whole bet at some point. The slot comes with 20 different pay lines and eleven paying symbols which are also connected to the game aesthetics as you can see the wanted poster, cowboy hat, guns, cigars, and tequila among them.

Besides the paying symbols, you will see some unique cards which trigger special features of the game: The scatter symbol, which are dynamites, activates the free spin bonus if you get three, four, or five of these symbols anywhere on the reels, The wild card, which is a sheriff’s star, appears on the second, third, and the fourth reels and can replace any other paying symbols in the winning combinations. It is also noteworthy that during the bonus spins, all wild symbols become locked till the end of the round to raise the chances of winning big money. All these qualities make Johnny Cash one of the Top BGaming slot games.

The gaming world of BGaming is magical and in my opinion, the visuals of the games are what makes them so special and unique. You can travel in Ancient Greek, Green forests, castles of Romania, the wild west, the heart of China, and much more places while playing. Another great thing about the BGaming Games is the dozens of features that they offer to the players.

You can win free spins with the scatter cards and play the juicy bonus rounds while enjoying the games of this developer. It is also noteworthy that most of the games developed by BGaming are classical slots and playing them is as easy for beginners as for the people who like relaxing by playing slots when they have free time.

Where Can You Play BGaming Games?

After reading this BGaming review it would be logical if you want to check their games out. You will find a full list of their games on the BGaming website and you can play demo versions of them by simply clicking. Playing games for free is the best way to rate them properly and thanks to its unique features it is almost as entertaining to play free as betting.

If you want to bet you can find games of the developer on many casino websites, but it is important to choose the website according to the currency you are going to bet. For instance, if you want to bet cryptocurrency you should find the casino which offers both, crypto services and games developed by BGaming on their website. In the twenty-first century popularity of cryptocurrency is rising and many websites offer these services to their clients, for example, PlayAmo, Bitstarz, or Avalon78.

Is Bgaming worthy of our trust?

The software developer has a license from Malta Gaming Authority and BMM testlabs, which makes BGaming trustworthy and the licenses from other gaming jurisdictions are just a matter of time.

Are the games developed by BGaming easy to play?

As most of the games developed by BGaming are the classical slots with 5 reels and 3 rows the rules of the games are pretty simple. You just need to press the spinning button and wait for the winning combination.

How much can you win from BGaming slots?

Most of the slot games developed by BGaming have medium volatility which means that the time between the wins and the number of coins you get on each win is pretty much balanced. The average RTP of the games is also pretty high which makes the winning chances even higher.

Can I play BGaming games free?

Yes, playing the developer’s games for free is completely possible and it is the best way to rate them properly. You can find their games on different gaming websites but if you want to find all games in one space, you should their official website and enjoy.